Nearly 600,000 Civilians Cut Off From Their Pensions In Ukraine

September 09, 2017
LUHANSK, Ukraine -- As many as 600,000 Ukrainian citizens have lost or had their pensions suspended since December 2014. Most of them are elderly residents of non-government controlled areas in eastern Ukraine. 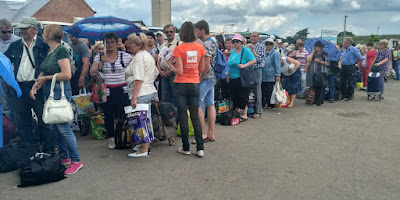 As of recently, Ukrainians are required to move to government-controlled areas and register as internally displaced to receive their pensions.

He had to apply to a court, as he had not been receiving his pension for almost a year.

Thanks to the court’s decision, in July 2017 Mikhail received his full pension benefits for the previous year.

However, if he continues living in a non-government controlled area, his pension will again be blocked and he will need to appeal to a court once more.

To date, courts have overwhelmingly taken decisions in favour of pensioners.

However, only around 10 per cent of affected people turn to courts for action.

Between January 2016 and April 2017, the number of people receiving pensions in the non-government controlled part of eastern Ukraine dramatically dropped by more than 560,000.

Many have lost their payments due to issues related to verification of their status as internally displaced persons (IDP) and of their actual place of residence.

“The elderly who are left in non-government controlled areas are among the most vulnerable of the civilian population. For many of them, pension payments are their main means to survive. Ukraine - as a party to the international conventions guaranteeing social protection - should take all measures necessary to ensure the rights of those people,” said Christopher Mehley, Country Director for the Norwegian Refugee Council (NRC) in Ukraine.

Suspending and cutting off people from their rightful pensions contradicts national and international obligations of Ukraine.

“The Ukrainian authorities should make every effort to de-link pensions from IDP status and residency in government-controlled territory. In parallel, a strategy should be developed to ensure pension payments to those who are immobile and cannot travel to government controlled areas. No civilian should be punished for their place of residence,” Mehley said.

Civil society and international organisations have been supporting the Ukrainian authorities to revise the current policy on pensions.

They have elaborated a potential procedure for payment of pensions to people living in non-government controlled areas.

Such a procedure is included in the recently registered draft law “On introducing amendments to the laws related to receiving pensions by certain categories of citizens.”

NRC urges the Parliament and the Government to immediately adopt procedures enabling access to pensions for people residing in non-government controlled areas.