August 06, 2017
WASHINGTON, DC -- It was with reluctance that US President Donald Trump on August 2 agreed to sign a new bill into law that slaps Russia with wide-ranging sanctions. 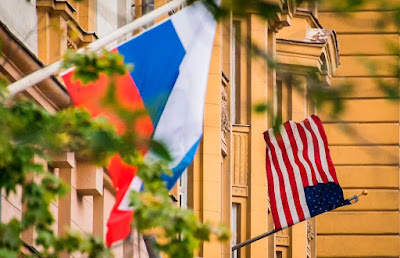 A Russian flag flies next to the US embassy building in Moscow on July 31, 2017. President Vladimir Putin on July 30, 2017 said the United States would have to cut 755 diplomatic staff in Russia and warned of a prolonged gridlock in its ties after the US Congress backed new sanctions against the Kremlin.

Passed by overwhelming majorities in Congress, the law mainly targets Russian state-owned assets including intelligence and defense, the railways and metals sectors, and prevents the export or import of any goods, services and technology to support Russia’s deep water, Arctic offshore or shale oil and gas exploration.

However, rather than pressuring Russia into political change, it is far more likely these measures will reinforce Russia’s view that any cooperation with the West would be a display of weakness.

This has serious and far reaching implications for the West’s ability to curtail Russia’s foreign interventions abroad, particularly in eastern Ukraine.

The new bill aims to coerce Russia into complying with the Minsk peace agreement – including withdrawing its forces from rebel-controlled eastern Ukraine and returning control of the borders to Ukraine.

The additional sanctions, many of which do not directly relate to Ukraine, will likely have the opposite effect, and make it much more difficult for the West to apply further pressure on Russia.

Given this, news of the sanctions bill was received tepidly in Ukraine.

While President Petro Poroshenko publicly welcomed the news, many broadcasters mulled the possibility that Russia could use an escalation of the Ukraine conflict to exact revenge on the US.

After the bill was signed, outspoken Russian MP Vitaly Milonov suggested Russia should boost support to citizens of the Donbass – in rebel-controlled eastern Ukraine– including granting them passports, further solidifying Russia’s support for the rebels.

This would jeopardize progress on brokering a peace deal and, more alarmingly for Ukraine, might prompt Russia to escalate the conflict.

This, alongside the US special envoy to Ukraine Kurt Volker’s comments in recent days that the US should supply ‘defensive arms’ to Ukraine, has the potential to make the conflict far hotter than before.

Yet a more likely scenario is that, barring occasional upticks of violence, the new sanctions will ensure a prolonged freezing of the conflict with no progress on a diplomatic solution in sight.

Russia’s response to US sanctions has so far been restrained.

When former president Barack Obama in December 2016 expelled 35 Russian diplomats and barred Russia’s access to two compounds in the US, Russia did not respond with tit-for-tat measures towards incoming president Trump.

As Congress debated the new bill last week, Putin, on a state visit to Finland, called the situation ‘regrettable’, maintaining that Russia would respond in a ‘composed’ manner.

Moreover, when it became clear that the bill was to be signed into law, Russia ordered the US to cut its diplomatic staff to 455 from the current (estimated) 1,200, which matches the number of Russian diplomats in the US.

However, the bill is unlikely to have any immediate effect – it is a strategic measure and many of its applications are long-term.

This gives Russia time to gauge whether the US administration will implement any of the law’s proposed threats, and consider further steps if required.

It is significant that the sanctions law is part of a package of measures also targeting Iran and North Korea for their nuclear proliferation programs and human rights abuses.

The US maintains it has targeted Russia over its military intervention in eastern Ukraine, supply of arms to the Syrian government, domestic human rights abuses, as well as Russia’s alleged involvement in the US presidential elections.

This suggests that the US no longer views Russia as a simple spoiler of its political interests abroad, but ranks it alongside countries perceived as actively subverting the US’s national interests.

Much has been made of the fact that the bill prevents Trump from using his veto authority to ease sanctions without congressional approval.

It is particularly telling that this stipulation applies only to the Russian sanctions, adding another layer of seriousness to the US’s handling of Russia.

Trump made no secret of his reluctance to sign the bill.

Calling it a necessary act for the sake of ‘national unity’, he frequently expresses dissatisfaction with sanctions as a way of diplomatically pressuring Russia.

The Russian administration has left the public response to Prime Minister Dmitry Medvedev – whose own political future is precarious.

Medvedev described the bill as a ‘trade war’, blasted Trump for his weakness in bowing to congressional pressure, and suggested that the sanctions regime would likely be in place for decades.

All this is a fairly predictable response from Russia.

But Putin himself has declined to comment since the bill became law, strongly suggesting that, despite the talk of a severance of bilateral relations, Putin may be leaving the door slightly open for dialogue with the US.

Russia’s Foreign Minister Sergei Lavrov will still meet US Secretary of State Rex Tillerson this weekend in the Philippines – the meeting has not been cancelled.

At the G20 summit in July it appeared that Trump and Putin had a chance of developing a positive personal relationship, but if these sanctions reveal anything, it is that neither Trump nor Putin are the only ones in charge – building a good relationship is now highly unlikely.

Republican support for the bill was almost unanimous, and Putin, his relatively cordial relationship with Trump notwithstanding, will have to revise his foreign policy strategy.

The EU is unlikely to follow the US’s example.

It would be an intense and significant break with US policy if the EU were to ease the sanctions entirely, and so there is unlikely to be any movement on the existing sanctions.

However, expanding sanctions to mirror the US would hurt business across Europe, and would face intense criticism from companies in the bloc.

Ultimately, the additional compliance requirements for businesses that the sanctions will create, and a climate of heightened political uncertainty, will significantly increase the difficulty of doing business in, or with, Russia.