August 11, 2017
KIEV, Ukraine -- On the larger geopolitical level, what is happening in eastern Ukraine matters, because it knits together a series of conflicts in the post-Soviet period. 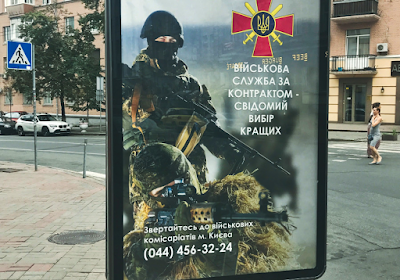 An army poster hangs in Kiev.

During the 2012 Operation Pillar of Defense she was involved with countering “fake news” – anti-Israel stories in the media.

Today Mokrenchuk is a press officer for the Ukrainian Army in Avdiivka, a town on the front line of the country’s three-year war with pro-Russian separatists.

As we picked our way this week through an abandoned industrial zone that had been cratered by artillery shells, she said that the same media propaganda used by terrorist groups that fight Israel is being used against Ukraine in its conflict with Putin’s Russia.

For Ukrainians, the war in the east of the country is one against “Russian aggression” and an “anti-terrorist operation.”

In a statement posted on the Ukraine Ministry of Foreign Affairs website on April 27, Kiev condemned the “Russian-backed illegal armed formations” and “constant cease-fire violations and shelling perpetuated by the hybrid Russian forces... the fighting and violence continue to be fueled by Russia and its military supplies.”

The war is more complex than that.

In 2014, Ukraine’s pro-Russian president, Viktor Yanukovich, fled Kiev after months of massive protests in the capital that had cost hundreds of lives.

He was removed from office in February of that year, which set in motion Russia’s annexation of Crimea in March and a declaration of independence by two separatist “people’s republics” based in Luhansk and Donetsk in eastern Ukraine.

Both of these small statelets border Russia.

After a brief attempt by the separatists to wrest control of Kharkov and other areas in Russian-speaking eastern Ukraine, they were pushed back.

In early 2015 the Russian-backed separatists defeated Ukrainian units, and an uneasy cease-fire was signed in Minsk.

This was supposed to lead to elections and to Ukraine eventually regaining control of these areas.

However, the separatists and Russia want these areas to receive some kind of autonomy.

In January 2017, Ukraine asked the International Court of Justice to rule against Russia and its “unlawful aggression.”

This was ostensibly to protect their rights and freedoms “during the political settlement period of the crises in certain districts of Ukraine’s Donetsk and Luhansk regions,” the Russian statement said.

The picture that is painted in eastern Ukraine is of a multi-layered conflict.

On the ground it is one that takes human lives every month, estimated at dozens on both sides.

Official figures are difficult to come by, but the Organization for Security and Cooperation in Europe (OSCE), which monitors the conflict, said that between January and May 24 a total of 44 people were killed and 181 wounded, almost twice as many as in the same period in 2016.

Casualties are even higher when one includes military dead and also those that go unreported on the separatist side.

A UN estimate puts the number at more than 10,000 since the beginning of the conflict, in a country of 45 million people.

That’s the human toll on the ground.

At the next level, this is a conflict for the heart and soul of Ukraine, a country that has sought independence from the Kremlin’s orbit for more than a century.

The Ukrainian poet Taras Shevchenko is a popular icon of this movement.

His picture graces the inside of a local military headquarters in Avdiivka, and a swank bar in Kiev, among other places.

For Ukrainians, especially the more nationalist ones, the war has crystallized the country’s struggle.

In dozens of conversations with the lowest level soldiers on the front line, to volunteers and activists and to journalists and analysts in Kiev, almost everyone spoke about the same issue: Ukraine fighting to remove the still decaying elements of the Soviet era and to embrace the West.

How that embrace takes place is sometimes contradictory.

Members of the right-wing Pravi Sektor, which has a political organization as well as volunteers who fight on the front line, see themselves as defending Europe and fighting for a free Ukraine.

However, the European values they like are those of the national Right, not exactly the borderless values of the European Union.

For the military and economic sector, the concept of integrating into Europe means shifting the army to a NATO model and shifting trade to the West.

All of this has come at a price for Ukraine, whose currency is at a five-year low against the dollar and Euro.

But Ukrainians seem to think they have turned a corner and the worst is behind them.

On the larger geopolitical level, what is happening in eastern Ukraine matters, because it knits together a series of conflicts in the post-Soviet period.

The model for conflict resolution in eastern Ukraine could involve Donetsk and Luhansk becoming a federal structure similar to the former Yugoslavian federation of Bosnia and Herzegovina and Republik Srpska.

It could also end up resembling the model of Moldova and Transnistria or the still unresolved conflict in Georgia with the breakaway statelets of South Ossetia and Abkhazia.

For the West, the role of Moscow in these conflicts is part of a larger concern over Russia’s role in the world, including accusations that it has meddled in elections – not only in the United States, but in Europe and elsewhere.

In early July, the US named former NATO ambassador Kurt Volker as a new special envoy to Ukraine.

The US involvement in Ukraine has a long pedigree, especially the Trump administration’s ties.

Paul Manafort, Trump’s campaign head from May to August 2016, whose house was reportedly raided by the FBI in July, had close ties to Ukraine’s former leader Viktor Yanukovych.

According to NBC, “while other American consultants, both Democratic and Republican, were working on the campaigns of Ukraine’s pro-Western parties, Manafort was working for a party whose base was in Russian-speaking Eastern Ukraine.

What happened in Donbass therefore was not simply a small separatist conflict, but one with lines connecting it to Washington and Moscow.

Conversations leaked in 2014 revealed then-assistant US secretary of state Victoria Nuland discussing which Ukrainian politicians should and shouldn’t “go into the government.”

From Moscow’s view, this was deep meddling in a neighboring state that Russia sees as part of its “near abroad” or zone of influence.

Is it a surprise that two years later Russia sought involvement in the US election?

A third side to consider in the Ukraine conflict is its ties to the Middle East.

After the 2014 war in Donbass and the Minsk II cease-fire of 2015, Russia began preparing to deepen its commitment to Bashar Assad in Syria in the summer of 2015.

Ukrainian soldiers of the 72nd Mechanized Brigade in Avdiivka claim they have been fighting Russian soldiers sent to the separatist side of the line, who change uniforms when they arrive among the separatists but use the conflict for hands-on training.

There is no way to verify this, but it is clear that the Ukraine conflict sought to deter the West and show that Moscow stands by its allies.

The question remains whether this conflict is an economic burden on Moscow, which has sent aid convoys to Donetsk and Luhansk, or whether it benefits Moscow.

There seems no chance that pro-Russia politicians will ever come to power again in Kiev, so the Kremlin may have lost Ukraine permanently.

But it can keep its influence through what Ukraine says are its “proxies” in the East.

From Israel’s standpoint, the lessons to be learned in Ukraine, besides the fact that Israel enjoys good relations with Moscow and Kiev, is that Moscow stands by its friends and that it knows how to achieve its limited goals.

These are concerns for Israel regarding the Golan Heights and Moscow’s close relationship with the Syrian regime, but Donbass also provides a model to learn from.