August 21, 2017
MINSK, Belarus -- The new U.S. special envoy for efforts to end the conflict in eastern Ukraine, Kurt Volker, met with a Kremlin aide on August 21 in the Belarusian capital, Minsk. 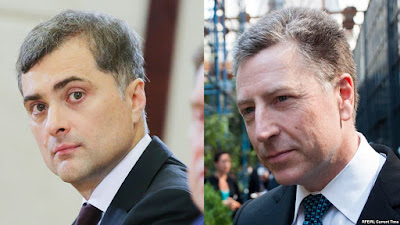 The Belarusian Foreign Ministry said on Twitter that Volker and Vladislav Surkov, an aide to Russian President Vladimir Putin and the Kremlin's point man for the conflict in eastern Ukraine, were meeting behind closed doors.

The U.S. State Department announced on August 18 that Volker and the Russian representative would discuss "Russian-Ukrainian relations."

Volker's talks with Surkov kick off three days of U.S. diplomacy on the war between Russia-backed separatists and government forces in eastern Ukraine, which has killed more than 10,000 people since April 2014.

From Minsk, Volker will head to the Lithuanian capital, Vilnius, to meet with senior government officials on August 22 to discuss "the way forward in Ukraine," the State Department said.

On August 23, Volker will join U.S. Defense Secretary Jim Mattis in meetings with senior Ukrainian government officials to discuss "the next steps in diplomatic negotiations to restore Ukraine's sovereignty and territorial integrity," the department said.

Russia-backed separatists seized parts of the Donetsk and Luhansk provinces, which border Russia, and the war has persisted despite a pact known as Minsk II, a February 2015 agreement on a cease-fire and steps to resolve the conflict.

Sanctions imposed by the United States, the European Union have not prompted Russia to abandon its support for the separatists or fulfill its commitments under the Minsk agreements.

Tillerson named Volker, a former U.S. ambassador to NATO, as the U.S. special representative for Ukraine negotiations in July.

In an interview with Current Time TV in July, Volker said that ending the fighting will require agreement by all sides on two major principles -- the "territorial integrity of Ukraine, security of all the people" -- and a change in Russia's approach.

Current Time TV is the Russian-language network, run by RFE/RL in cooperation with VOA.

He said that the United States is considering sending Kiev weapons to help government forces defend themselves against Russia-backed separatists.

To date, the United States has provided only nonlethal military aid.

Relations between Moscow and Washington have been driven to a post-Cold War low by disagreements over issues including Russia's aggression in Ukraine, its role in the war in Syria, and its alleged interference in the U.S. presidential election in 2016.