August 19, 2017
PENTAGON, USA -- U.S. Defense Secretary Jim Mattis will travel to Jordan, Turkey and Ukraine next week for talks with the leaders of all three nations. 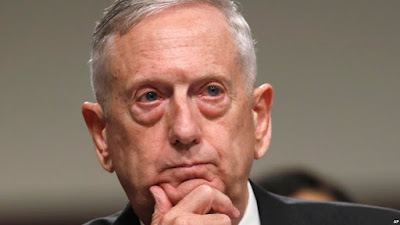 Pentagon officials said Friday that Mattis aims to reaffirm Washington's commitments to each of the countries.

Mattis will begin his trip by meeting with Jordan's King Abdullah as well as top defense officials.

Jordan has been a key partner in the U.S.-led coalition against the Islamic State terror group.

From Jordan, Mattis will head to Turkey for meetings with top officials, including President Recep Tayyip Erdoğan.

"Secretary Mattis will emphasize the steadfast commitment of the United States to Turkey as a NATO ally and strategic partner, seek to collaborate on efforts to advance regional stability, and look for ways to help Turkey address its legitimate security concerns — including the fight against the PKK," the Pentagon said in a statement.

The PKK, also known as the Kurdistan Workers' Party, has been leading an insurgency against the Turkish government since 1984.

It is listed as a terrorist group by the U.S. and many European nations.

His visit comes amid reports the Trump administration is considering providing lethal defensive weapons to Ukraine in its fight against Russian-backed separatists.

"During these engagements, the secretary will reassure our Ukrainian partners that the U.S. remains firmly committed to the goal of restoring Ukraine's sovereignty and territorial integrity," the Pentagon statement said.

The visits to Jordan and Ukraine will be Mattis' first as defense secretary.