August 10, 2017
WARSAW, Poland -- Ukraine is negotiating the sale of 100 T-84 Oplot main battle tanks to Pakistan, and plans to use the funds to modernize the production capacities of its state-owned defense industry and invest in research and development, according to daily Gazeta Wyborcza. 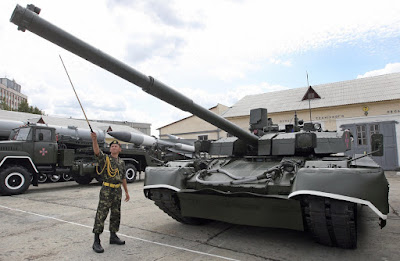 A Ukrainian officer stands next to a Ukrainian Oplot tank in Kiev.

The potential deal, which is to be handed to Ukraine defense group Ukroboronprom, would mark another export contract for the supply of the tanks following a deal signed in 2011 with Thailand.

Bangkok is to obtain a total of 49 Oplots.

In the 1990s, the Ukrainian defense industry supplied 320 T-84UD tanks to Pakistan’s military under a deal worth some $600 million.

In addition to export sales, Ukroboronprom is also producing Oplots for the country’s armed forces.

Last month, Ukrainian President Petro Poroshenko announced that more than 300 million hryvnia (U.S. $12 million) will be allocated to acquire an undisclosed number of tanks for the Ukrainian land forces.

A “lion’s share of the money” will be allocated to purchase Oplots “so that our soldiers can effectively fight,” Poroshenko said in a statement by Ukroboronprom.

The Ukrainian military is combating Russia-backed insurgents in the country’s east.

The Oplot has a weight of some 51 ton.

The tank can carry a crew of three, and it is enabled with a maximum speed of 70 kph (44 mph), according to data from Ukroboronprom.

The Oplot is produced by the group’s subsidiary Malyshev at its plant in Kharkiv.