August 19, 2017
KIEV, Ukraine -- Statues and busts of Vladimir Lenin, once ubiquitous in Ukraine, have been torn down in every city across the country as part of a “decommunisation” drive. 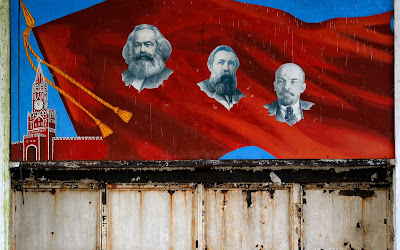 Volodymyr Vyatrovych, head of Ukraine's institute of national memory, said in an interview with local publication Liga.net that 2,389 monuments, including 1,320 monuments to Lenin, have been razed across Ukraine.

“Lenin is no more in cities in Ukrainian-controlled territory,” Mr Vyatrovych said.

However, some Lenins likely remain in villages or on factory grounds and “can be dismantled only when found”, since such statues were never registered with the government, he said.

The communist leader also lives on in the breakaway republics in eastern Ukraine, where Russia-backed separatists prize the Soviet past and decry the pro-Western Kiev government as a fascist regime.

Most of the Lenin statues were gypsum figures with no historical value, Mr Vyatrovych claimed, and were simply destroyed.

Those made of valuable metals were melted down, while a few dozen large monuments were saved for a museum of Soviet propaganda to be established in Kiev.

The latest toppling of Lenin statues, known colloquially as the “Leninfall”, began when protestors pulled down a Lenin in Kiev during the Euromaidan demonstrations that eventually toppled president Viktor Yanukovych.

It continued under a set of decommunisation laws in 2015 that banned communist and Nazi symbols and made it a criminal offense to question the actions of Second World War-era Ukrainian nationalist groups.

These organisations fought the Soviets, but also at times collaborated with the Nazis and participated in ethnic cleansing of Poles and Jews.

While supporters claim the measures are needed to build national identity, 70 international scholars and experts on Ukraine condemned them as an attack on freedom of speech.

Under the legislation, the authorities also began a campaign against Soviet toponyms.

Mr Vyatrovych told Liga.net that 32 cities and 955 towns have been renamed, as well as two regions.

One village even rebranded its Lenin Street as John Lennon Street in honour of the Beatle.

Nationalists played a key role in both the Euromaidan protests and the conflict with Russia-backed separatists in eastern Ukraine.