Experts Debate Pros And Cons Of Lethal Arms For Ukraine

August 11, 2017
WASHINGTON, DC -- U.S. military experts are lining up on either side of a debate on whether to supply lethal defensive weapons to Ukraine, a move that would mark a turning point in U.S. policy on Kiev's 3-year-old conflict with Russian-backed separatists. 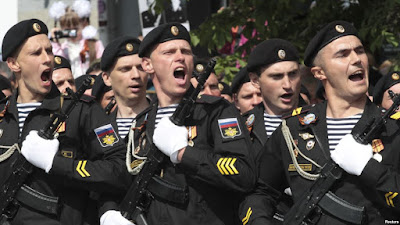 Russian servicemen march during the Victory Day military parade in Simferopol, Crimea, May 9, 2017.

Supporters of the move, which is under active consideration by President Donald Trump's administration, argue that it is long overdue.

The current policy of supplying only non-lethal military gear has neither deterred Russian aggression nor created an opening for cooperation with Moscow to resolve the conflict, they argue.

"I don't think Russia has given us a window for more positive cooperation on Ukraine," said Molly McKew, an independent analyst with consulting firm Fianna Strategies.

"Maybe other places. But, I certainly don't see it. So, I think it's time to reconsider what our strategy has been and what that means.

"And ... Ukraine is not asking for foreign troops to come and stand beside them," she told VOA's Ukranian Service.

"They're asking for the ability to fight the war in the way that they know they need to fight."

Other advocates argue that sending a message of strength would be timely after Russia retaliated against U.S. sanctions by expelling U.S. Embassy staff from diplomatic property in Moscow and demanding their numbers be reduced by 755 people by September 1.

But opponents of the move worry that supplying lethal weapons to Ukraine could escalate the conflict and provoke retaliation from the Kremlin, which has already denounced the possibility.

"I think it would make much more sense to re-think some of the aid and capabilities that are being given ... and not plan them for a short-term fight, since major battles in the fronts are now passed," said Michael Kofman, a researcher at CNA Corporation, a private research organization.

"I hear these arguments that it's somehow provocative to Russia or that it's going to embolden Ukraine to attack," he said.

"These are just flat out wrong. First off, Russia is already in Ukraine, they are already heavily armed. There are more Russian tanks in there than in Western Europe combined. It is a large, large military presence. And, there's an even larger military presence surrounding Ukraine from Russian territory."

Analysts on both sides agree that Russia's overwhelming military advantage over Ukraine means the supply of U.S. weapons would provide more of a political and morale boost for Kiev than a defense one.

Nevertheless, Moscow is likely to raise the issue with Volker, a former U.S. ambassador to NATO, when it gets the chance.

Russian Foreign Minister Sergei Lavrov has said the special envoy is expected to visit Russia for talks on Ukraine in the near future, although U.S. officials have yet to confirm the trip.

"It will be interesting because Mr. Volker has been in a number of capitals already including Kiev, Paris, Berlin, London," Lavrov said.

"We would be interested to see what impression the U.S. special envoy has on the current state of affairs."

During a trip to Ukraine last month, Volker visited front-line areas in the east where Ukrainian troops have been in a stand-off against Russia-backed separatists for the past three years.

He blamed Russian aggression for the violence, which has killed more than 10,000 people since 2014, when Russian forces seized Ukrainian military bases in Crimea, annexed the Black Sea peninsula, and began covert support for separatists in eastern Ukraine.