A Scene From Putin's Worst Nightmare Just Unfolded In Ukraine

August 26, 2017
KIEV, Ukraine -- Ukraine celebrated its Independence Day from the former Soviet Union on Thursday with a military parade through central Kiev. 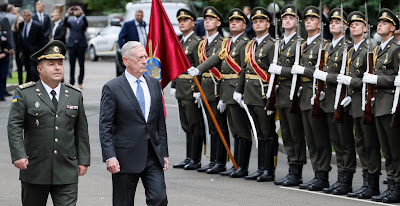 Not only was Defense Secretary James Mattis in attendance, along with eight other foreign defense ministers, but about 230 troops from the US and seven other NATO countries also marched alongside Ukrainian soldiers.

It was the first time US soldiers ever participated in Ukraine's Independence Day parade.

"We are honored to be here marching alongside other countries showing our support in Ukraine," 1st Sgt. Clifton Fulkerson said.

As US troops marched down the street, a wave of cheers and applause reportedly went through the crowd of Ukrainians on hand.

But not everyone was thrilled with NATO's involvement.

"That kind of parade is not a celebration of independence, but rather a show of dependence on the US and NATO," a pro-Russian Ukrainian politician, Vladimir Oleinik, told Russian media outlet Sputnik, which the Russian Embassy in Canada tweeted.

"In the reverse, it would be difficult to imagine Poroshenko coming to celebrate the 4th of July in Washington while Ukrainian troops marched in Washington."

The Russian Embassy in Washington D.C. did not immediately respond to Business Insider's request for comment.

After the parade, Mattis met with Poroshenko to discuss the possibility of supplying Ukraine with defensive weapons such as the Javelin.

"Have no doubt the United States also stands with Ukraine in all things," Mattis told reporters while standing next to Poroshenko after they met.

"We support you in the face of threats to sovereignty and territorial integrity, and to international law and the international order writ large."

"We do not, and we will not, accept Russia's seizure of the Crimea. And despite Russia's denials, we know they are seeking to redraw international borders by force, undermining the sovereign and free nations of Europe."

While he acknowledged that the US just recently approved giving Kiev $175 million worth of military equipment, he stopped short of saying whether the US would supply Kiev with $50 million worth of anti-tank missile systems.

"I prefer not to answer that right now," Mattis said, adding that the proposal is under review.

Supplying Ukraine with anti-tank missiles and other defensive weapons has been a controversial proposition.

Former President Obama did not support such a move, arguing that it would provoke Russia.

France, Germany and some analysts have expressed the same concerns.

Many Russian politicians and officials have also spoken out against the plan.

But Mattis appeared to slightly give away his own take.

"Defensive weapons are not provocative unless you're an aggressor," he said at the press conference, "and clearly, Ukraine is not an aggressor, since it's their own territory where the fighting is happening."