July 07, 2017
WASHINGTON, DC -- Washington is considering heeding calls on all sides to appoint an envoy to the Minsk peace negotiations between Russia, Ukraine, and separatists in the east, a senior U.S. State Department official said on July 5. 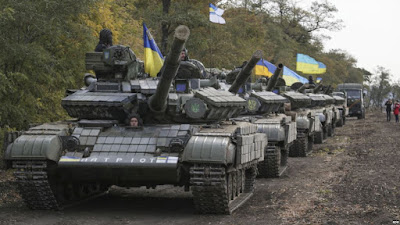 The Minsk peace agreement so far has failed to produce even a lasting cease-fire in the Ukrainian conflict.

Secretary of State Rex Tillerson, who is due to visit Ukraine next week, has said he would like to help the agreement reached between the warring sides in the Belarusian capital in 2015 succeed, though it has so far has failed to spark even a lasting cease-fire.

Tillerson has also said he doesn't want to be "handcuffed" to the Minsk accord, however, if alternative ways of settling the war that has killed more than 10,000 arise.

The senior State Department official said all parties to the agreement "have asked for a U.S. interlocutor that they can work with -- some sort of Minsk coordinator or envoy ... and we are actively considering that."

The Minsk agreement was brokered by France and Germany and signed by Russia and Ukraine in early 2015.

It calls for a cease-fire, the withdrawal of heavy weapons from the front line, and constitutional reforms to give eastern Ukraine more autonomy.