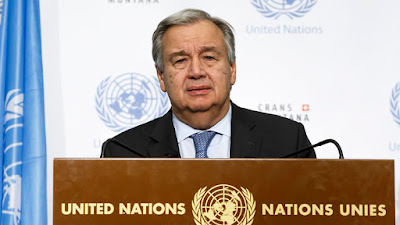 Guterres spoke to journalists at the start of a meeting with Ukrainian Prime Minister Volodymyr Groysman, while making his first visit to Kiev.

"We know that fighting is still happening. And, of course, our appeal is for a complete ceasefire," Guterres stressed.

The UN chief specified that he was referring to last month's agreement on a so-called "harvest ceasefire."

Brokered by the international monitors, the latest ceasefire agreement went into force on June 24 and was intended to make it possible for local farmers to harvest their crops.

Guterres made the appeal as US Secretary of State Rex Tillerson met President Petro Poroshenko for talks in Kiev expected to reinforce US support for Ukraine and urge it to enact reforms.

The latest ceasefire has helped reduce fighting in the 38-month separatist conflict but sporadic clashes along the volatile frontline have nonetheless killed nine Ukrainian soldiers and wounded dozens.

More than 10,000 people have been killed since the pro-Russian insurgency began in April 2014, which Kiev and the West accuse Moscow of masterminding.

The US and EU have imposed sanctions on Russia, but Russia has denied backing the rebels.

A number of international organisations, including several UN-run bodies, are working to help those caught up in the conflict that has seen some 1.7 million forced to flee their homes.

"You can count on our strong commitment to support humanitarian action to bring some relief to the people that have been displaced," Guterres said.