July 10, 2017
KIEV, Ukraine -- They appear as a blazing expanse of curious eyes. Field after field of sunflowers, occasionally interspersed with wheat, on the road to Adiivka just inside the Government side of the front line. We are a few miles from the front but the farmers are still working these fields. They must. 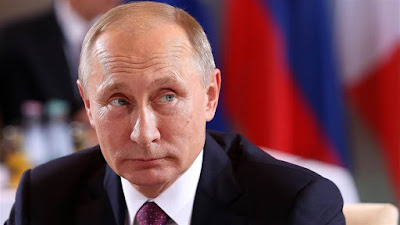 Out here on the far edge of world's concerns nobody looks to the Government to rescue them.

There are chimneys still pumping out noxious smoke from the coke and chemical plants, and mine dumps looming over the green and golden landscape, and the checkpoints, machine gun nests, artillery pits and trenches of a war that knows no end.

Many more have been maimed and traumatised.

Hundreds of thousands are displaced.

This Donbass region, once the industrial heartland of Ukraine, has been turned into a husk of its former self.

Things were bad enough before any war began thanks to the economic decline that came with the fall of the Soviet Union and the takeover of many state-owned enterprises by oligarchs.

I have been coming here since just before the war began in earnest.

Just over three years ago 'spontaneous' protests, brought to power a rebel leadership made of up Russian placemen and local opportunists, their rule enforced by a campaign of thuggery which began with the battering peaceful protesters and which was quickly militarised with the direction and material aid of Vladimir Putin.

Protests in Kiev had recently got rid of the pro-Putin President.

So Vladimir decided to put manners on the new rulers of Ukraine with their dreams of joining the EU and NATO.

Back then I remember meeting 'Maria' for the first time.

She worked for the local government but had been driven from her post by the rebels.

A quiet, sensitive and thoughtful woman, diminutive in stature but with that most dangerous of things in the new order being created by Putin's stooges: she had an independent mind and was not afraid to speak it.

On that afternoon in the regional capital Donetsk she was still in shock having seen the world she knew - ordered and civil - overturned in just a few days.

Louts in balaclavas wanted to arrest her but she'd escaped just in time.

I watched other wanted people being hauled through baying mobs and kicked and slapped before they vanished into the clutches of the newly minted secret police.

A woman accused of spying for the Government was tied to a lamppost and kicked and spat at by men and women.

Last night, three years later and on my way to the front, I met 'Maria' for dinner.

It was a sad occasion, though I did not pretend that.

She was trying to put on a hopeful face and I respected her courage.

These days she lives on the government side of the front line.

Her husband is on the other side, a believer still in the rebel cause and a man with whom she cannot discuss politics or very much else.

She has lost her job, her home and now lives alone in a single room in a dormitory, an exile from the city of her birth, a woman looking out on the mid-summer evening and speaking of the importance of living in the present, not looking back or forward.

I nod my head.

What else can she say, being where she is?

I cannot absolve the Ukrainian political elite from their part in this disaster.

Corruption and neglect, followed by an unhealthy collaboration with the far right and ultra-nationalist militias who saved their defences at crucial times - these both created resentment and provided Putin and his armies of internet trolls with ammunition to demonise the Ukrainian cause as the rebirth of fascism in Europe's east.

I confronted the Ukrainian President, Petro Poroshenko, about this during an interview.

He regarded it all as Russian propaganda.

Afterwards his main press handler rounded on me with a furious version of the same shtick.

I stood my ground because I was sure of the facts.

For the record, Ukraine is not run by crazed fascists intent on dominating Europe.

It is far too muddled for that.

It is a politics of factions constantly manoeuvring around each other, some seeking to reform, others resisting.

The blockade of industrial trade with the east led by the ultra-nationalists also deepened civilian suffering.

But these days it is the Ukrainian army and National Guard who are the main defenders of the front line.

There are still far-right militia around but they are much less obvious along the front lines.

You can't miss it.

He is paying to keep the war going and the face of the sponsor flickers back from every shell-blasted house around Adiivka.