July 20, 2017
KIEV, Ukraine -- Since the conclusion of Maidan, politically motivated private security actors operating in parallel with the Ukrainian government have played an integral part in the country’s security landscape. 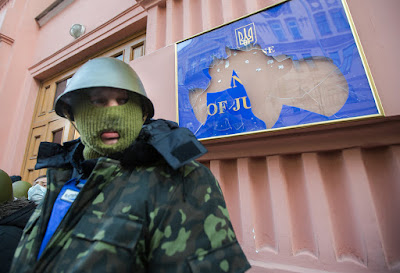 Volunteer battalions represent a legitimacy dilemma for the Ukrainian government.

While some have been cooperating with Ukrainian authorities, others experience great friction with the Ukrainian Armed Forces (UAF) and Ministry of Interior Affairs (MIA), undermining the formal security structures of the Ukrainian government.

It seems that political and military power have become inseparable at the unit level, with many battalion commanders also being career politicians or parliamentary members.

The term “volunteer battalion” is common vernacular in the context of post-Maidan Ukraine.

While the term may seem straightforward to anyone with a basic familiarity of the conflict in eastern Ukraine, it encompasses a wide range of units active and inactive in the Anti-Terrorist Operation (ATO) zone today.

Effectively, these units can be viewed along an axis of patronage, with those relying on the government as the primary patron representing the formal units, and those that rely on civil society representing the independent units.

Frictions with the government and lasting connections to political entities—a result of a haphazard, and in some instances nonexistent, reorganization effort—raise questions about the allegiances of these units.

If unchecked, some of these units will erode the legitimacy of the Ukrainian security institutions.

A persistent issue facing Kiev originates in its own complacency, and to some degree the ambivalence of the Ukrainian people towards security institutions.

Since the beginning of the conflict in the Donbass, far-right nationalist militias operating completely independently from the government have been a recurring theme, and while many have demobilized, integrated into the formal security structure or entirely disbanded, some still persist.

While both share a common history, they have come to diverge in how they interact with the government.

In late March 2015, well after illegal groups were issued a general stand-down-and-disarm order, Pravy Sektor was ordered to leave the coastal frontline city of Mariupol and the ATO area.

Pravy Sektor, which believed themselves to have an agreement with the Ministry of Defense regarding their presence in the ATO zone, considered the order treacherous.

Months later, Pravy Sektor ended up in a shootout with Ukrainian authorities after an extensive standoff.

After the standoff between DUK and police in late 2015, People’s Deputy and former leader of Pravy Sektor Dmitro Yarosh resigned from Pravy Sektor.

He took the fifth and eighth DUK battalions with him to form the Ukrainian Volunteer Army (UDA) under his own new political party.

Shortly after, DUK disbanded virtually its entire structure in order to carry out an extensive reform.

It aimed to organize itself on a small amount of active combat units, with a large reserve force built around the sotni structure.

Units of the Ukrainian Volunteer Army under Dmitro Yarosh and his political party Diya (Action) enjoy an improved relationship with the Ukrainian government compared to DUK.

The UDA’s two combat battalions and single medical battalion are funded through citizen initiatives, supplying them with everything a light infantry battalion could need.

These initiatives are funded by private donations of material support or financial deposits.

The UDA has an exceptionally good relationship with official Ukrainian units compared to other independent volunteer units, and will in some cases even invite UAF units onto their bases to conduct joint drills.

Equally interesting is the case of the Organization of Ukrainian Nationalists (OUN) and their volunteer battalions.

After a prolonged standoff with the UAF’s 93rd Separate Mechanized Brigade in the frontline town of Pisky in 2015, the OUN agreed to relinquish its command of part of its battalion and let it integrate with the formal Ukrainian security structure under the Ministry of Defense.

This specific brigade has come to be the destination for a number of other formerly independent volunteer units, such as the Carpathian Sich, a unit with deep connections to the political party Svoboda (freedom).

Still, the unit maintains its relationship with the OUN, which is one of the oldest Ukrainian nationalist organizations, and has been ripe with controversy throughout the past century.

Still, the nature of the relationship between the OUN and the Ukrainian government appears to be one of convenience rather than one of allegiance.

While the OUN volunteer battalion does take orders from the UAF, it remains a self-sustaining organization, and soldiers from other parts of the Ukrainian ground forces can’t transfer to that unit.

Like Pravy Sektor’s DUK and Yarosh’s UDA, the OUN’s volunteer units run on private donations, conduct their own training and maintain their own rehabilitation centers.

In addition to this, the OUN keeps reserve sotni similar to those of DUK, which are not necessarily affiliated with the Ministry of Defense in any way.

The OUN as an organization remains at odds with the Ukrainian government, and as recently as May 9, national guard troops stormed OUN headquarters in Kiev.

Inside the headquarters were members of OUNs “Storm Corps,” which had unofficially completed a rotation to Donbass in the summer of 2016.

The OUN volunteer battalion is now scheduled to begin its first official deployment this summer for a duration of approximately three months.

Questions remain about the status of the unofficial armed elements of the organization, and if it will find itself in contest with the government once more.

Formal units of the Ministry of Internal Affairs in the ATO zone used to make up the majority of active units in the area but are now a minority, and have largely been replaced by units under the Ministry of Defense.

The National Guard of Ukraine (NGU), a type of gendarmerie on steroids under the MIA, contains some of the revered and politically active units to have sprung out of the conflict thus far.

The National Guard’s 18th Operative Purpose Regiment in particular represents this category of units with far-right motivations, as it contains both Azov and Donbass battalion.

These units have, through their growing popularity, been able to seize initiative and expand their functions to beyond what would be considered normal for a national guard unit.

They’ve been able to accomplish this due to a general distrust in government institutions.

As of 2016, volunteers were the second most trusted institution in Ukraine, second only to the church.

Azov, perhaps the most well-known unit in the conflict, has grown immensely since its inception.

The nongovernmental institutions hold a great significance in Ukrainian society, and have gained notoriety in the past year.

On October 12th 2016, Azov’s own press corps announced the coming establishment of the “National Corps” political party on October 14, which would be formed on the basis of the alread-established Azov Civil Corps.

Azov’s Civil Corps, along with the National Corps, is intrinsically connected with Azov, which in turn had sprung out of civil society movements itself.

Azov’s Civil Corps has been active since at least 2015 as a recognized entity, and its members identify themselves as activists.

However, the Civil Corps has gained notoriety for its operations against certain private establishments.

In spite of its bad press, the Civil Corps does have positive functions commonly associated with civil society, such as self-defense classes, issuing storm warnings, visiting animal shelters and so on.

The Azov Civil Corps is known to hold blockades of private and public entities.

One such blockade occurred in front of Kievmiskbud’s office.

There, the Civil Corps physically prevented employees from entering the building if Azov had deemed the organization to be in violation of some sort of code, be it moral or legal.

However, the height of these operations was reached in March 2017 when the Azov Civil Corps, with help from other groups, walled off the Russian Sberbank Headquarters in Kiev in an attempt to prevent the bank from being accessible.

This climactic event came after a long line of attacks and blockades on Sberbank assets by the Azov Civil Corps.

These attacks on Sberbank in particular were based on claims that the bank was secretly fueling Russian separatism in the east.

This is a common motivation for activism by organizations related to military institutions in Ukraine.

The Separate Special Purpose Battalion “Donbass,” under the command of battalion commander and People’s Deputy of Verkhovna Rada Semen Semenchenko, is currently a source of controversy due to its connection to an ongoing blockade of separatist held areas.

Semenchenko is no stranger to confrontation with the Ukrainian government.

He has been known to speak his mind since his criticisms of the Ukrainian military leadership in light of the Ilovaisk massacre.

This blockade was launched in late January 2017 by Semenchenko himself, using demobilized Donbass battalion fighters and activists to enact the blockade.

Ihor Kolomoyskyi, the Ukrainian oligarch behind the funding of initial stages of the ATO, is suspected to be the financier of the operation.

The blockade was met with heavy resistance from the Ukrainian security establishment, which denounced it as a destabilizing factor in the already precarious relationship between Ukraine and rebel entities.

Kiev went as far as to condemn it as a “populist action.”

Eventually, Ukrainian police tried to break up the protest by force, but were unsuccessful.

After the rebels nationalized Ukrainian industry on their territory, authorities accepted and adopted the blockade as official policy.

In June this year, Donbass battalion veterans—under the command of Semenchenko together with veterans from OUN and Aidar battalion—went to reinforce a group of farmers in the village of Berezhynka over an apparent land dispute.

The farmers claimed that they were up against members of the political party ‘People’s Front,’ Minister of Internal Affairs Avakov and others in the dispute.

Shortly after the arrival of Donbass reinforcements, the national guard and other special units of the MIA showed up and detained everyone involved.

This would not have been the first time that the national guard has been called in to dismantle such displays.

In fact, such frictions between the Ministry of Internal Affairs and volunteer groups have slowly been intensifying.

This has confirmed the reservations of many who joined the NGU upon its re-establishment in 2014—a gendarmerie could be used against their interests, just as the Berkut had been used before.

Regardless of opinion on volunteer battalions in Ukraine, they represent a legitimacy dilemma for the Ukrainian government.

Volunteers are currently more trusted by the Ukrainian people than the agencies which are supposed to govern them.

Such groups are also in competition with the government for the monopoly of legitimate violence to some degree are.

All signs are showing that Avakov and the Ukrainian security establishment intends to deal with this issue.

However, this might be too little too late in a society that has grown disillusioned with the promises and expectations of Maidan.