Ukraine Must Prove Its Commitment To Credibly Investigating Sheremet’s Murder

July 13, 2017
KIEV, Ukraine -- Pavel Sheremet was a journalist of rare caliber, one whose reporting exemplified the best practices in the countries he covered: Belarus, Russia, and Ukraine. 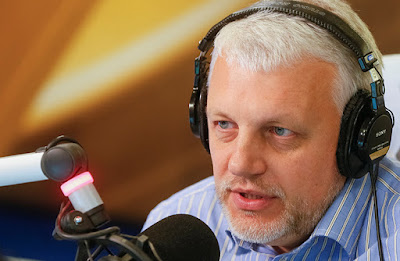 Pavel Sheremet talks on air at a Kiev radio station in 2015. The journalist’s career spanned print, radio, and TV in Belarus, Russia, and Ukraine.

Despite threats and attacks during his career, Sheremet was not afraid to take on authorities.

It was for this reason that CPJ honored him with an International Press Freedom Award in 1998.

When a car bomb killed Sheremet on July 20, 2016, the journalism community lost not only a colleague but an ardent supporter.

His eloquent style and pursuit of truth is what led CPJ in 2005 to ask Sheremet to lead a conference in Moscow highlighting impunity in the murders of journalists in Russia.

It was a perfect fit.

For years, Sheremet demanded answers to the disappearance and presumed killing in 2000 of his colleague and friend, Belarusian cameraman Dmitry Zavadsky, and he spoke passionately in Moscow about the need to fight for justice, ask tough questions, and demand answers.

Sheremet was able to infect everyone present with his belief that when working together, truth will out and justice will prevail.

Sheremet’s death took place at a divisive time in Ukraine.

In 2016, CPJ documented attacks and hostility against journalists who covered the government critically or questioned its handling of the conflict with Russia-backed separatists.

In some instances, government and security officials—including the Interior Minister overseeing the department investigating Sheremet’s murder—not only stood by, but cheered the attackers on.

Against that backdrop, the murder of such a prominent figure sent reverberations through Ukraine’s press corps.

Independent journalists there say they continue to dig into sensitive topics—corruption, abuse of office, the war in the east—but at an increased sense of peril.

Ukrainska Pravda’s editor-in-chief, Sevgil Musayeva-Borovik, told CPJ, “I fear for the safety of my colleagues ever since [Sheremet’s death]. After this murder, you want to be careful. I don’t know how long this feeling will last.”

Yevgeny Kiselyov, a Russian journalist and International Press Freedom Awardee, added, “A journalist can be killed as an edifying lesson to others. It says, ‘Don’t try too much.’”

Olena Prytula was sleeping so deeply that her mind would not be fully alerted to the real-life nightmare unfolding outside her door until she came face to face with it.

It was around 7:40 a.m. on July 20, 2016, and Prytula’s common-law partner, the Belarusian-born journalist Pavel Sheremet, had kissed her goodbye as he did every morning before driving her car to work at Kiev’s Radio Vesti, where he hosted a daily news program.

But on this day, with the sun shining in, Prytula, who is the owner, co-founder, and former editor-in-chief of the influential news website Ukrainska Pravda, dozed off.

When a powerful explosion rocked her bed, scattered the birds outside her window, and set car alarms screaming on the street at 7:45 a.m., she said she almost didn’t get up.

“I came to the balcony to see what had exploded and where, but there was no sign of smoke and I couldn’t understand where it was coming from,” Prytula said.

She told me she was crawling back into bed when “a thought came to my mind that we could report on what happened. And if Pavel was driving nearby, he would definitely stop and take a photo, or tweet it to talk about it later on the radio.”

Prytula said when she called his phone she received a message saying the number couldn’t be reached, so she figured he had forgotten to turn it on.

She thought it was odd, but figured he was probably already in the studio preparing for his program.

But at the Radio Vesti office, Sheremet’s coworkers had not seen him and were wondering why he hadn’t shown up.

Maria Shtohryn, a station presenter who often worked with Sheremet, said she tried calling him around 7:50 a.m. but reached the same automated message that Prytula heard.

“We were surprised because he always came early before his program started,” she told me.

She said she recalled thinking that maybe he was stuck in traffic.

Meanwhile, outside Prytula’s window, people were flocking to the intersection some 500 feet south of her apartment where Ivan Franko Street meets Bohdan Khmelnytsky Street, a busy traffic and pedestrian crossing one block from the national opera house in the heart of the Ukrainian capital.

She said her journalistic instincts kicked in.

“I didn’t even wash my face, I just put on the first dress I saw and went out to the street,” she said.

Prytula said she found a crowd at the intersection and a charred, smoldering car that had been destroyed by what authorities would later say was an improvised explosive device.

People were panicked, and debris was scattered across the street.

The timestamp on the photo she took helps track her moves at the scene.

It was difficult to discern the model, but a firefighter told her it was a Ford.

Prytula said she thought to herself, “Thank God it’s not ours.”

But when firemen washed clear the wheel rims, she said, they revealed a Subaru—her Subaru CrossTrek.

Police officers didn’t know where the driver—Sheremet—had been taken, only that he had been removed from the vehicle.

Prytula found him in an ambulance across the street, on a stretcher, covered with only his face visible.

“He was recognizable, but his face didn’t look alive.”

She said a paramedic cautioned her not to touch Sheremet because his leg, hanging on by tissues of skin, “was falling off.”

Moments later, he was pronounced dead.

Pavel Sheremet, a 44-year-old burly Belarusian by birth, lived and worked for extended periods of time in his native country as well as in Russia and Ukraine.

He had a far-reaching network of friends who adored his wit and charm and respected the work he did as an investigative reporter, TV anchor, political commentator, and author.

He also had enemies.

He was critical of authorities in each of those former Soviet states, where he cultivated close personal and professional relationships with powerful figures, including controversial ones.

He had long been the target of harassment and threats because of his reporting—leading family, friends, colleagues, and investigators to say they believe the motive for his killing was most likely revenge for his professional activities.

There was hope in the beginning that Sheremet’s murder would be solved quickly.

The case was a crucial test for Ukraine’s reformed, pro-Western government, and President Petro Poroshenko promised in a July 2016 statement to personally oversee “a transparent investigation.”

He said no resource would be spared and assigned the country’s top investigative officials to the task.

“It is a matter of honor to take all measures to solve this crime as soon as possible,” Poroshenko said.

But nearly a year after Sheremet’s death, the case seems to have gone cold.