Ukraine In NATO? America Should Reject A Bad Idea That Only Grows Worse With Age

July 15, 2017
WASHINGTON, DC -- The government of Ukraine reaffirmed its desire to join NATO. The alliance said the door is open for Kiev. It’s an idea that only grows worse with age. 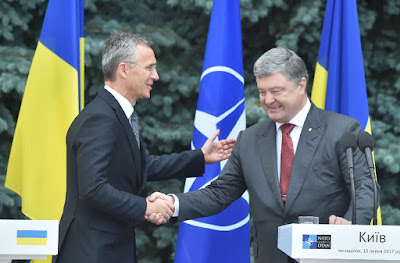 Earlier this week Ukrainian President Petro Poroshenko met NATO Secretary General Jens Stoltenberg in Kiev, proclaiming that “Ukraine has clearly defined its political future and its future in the sphere of security,” as part of the transatlantic alliance.

Discussions are to begin on a Membership Action Plan and, Petroshenko added, his government would pursue reforms in order to “have a clear schedule of what must be done by 2020 to meet the NATO membership criteria.”

Stoltenberg was noncommittal but positive: “NATO will continue to support Ukraine on the path towards a close relationship with NATO, to implementing reforms and to meeting NATO standards.”

A membership decision would be up to “the allies and Ukraine to decide, no one else has a right to veto such a process.”

Moreover, he added, “NATO will continue to provide Ukraine with practical support.”

It’s easy to understand why a majority of Ukrainians want NATO’s protection.

And who wouldn’t like the global superpower to take over one’s defense?

Their country established its first contact with the alliance in 1991 when Ukraine joined the North Atlantic Cooperation Council.

Since then Kiev has received aid and support while contributing troops to some allied operations.

NATO worked great for the Western Europeans during the Cold War.

Since then Central and Eastern European nations have clambered on board.

The Baltic States too.

Even Montenegro got on the gravy train earlier this year, despite doing nothing to make America more secure.

With European countries continuing to lag well behind the U.S. in military outlays as well as spending as a percentage of GDP, Kiev recognized the sweet deal to be had.

Western officials insist that no third party, i.e., Russia, has any say on who joins the alliance.

That’s fine as far as it goes.

But that isn’t very far.

Neither should the nation seeking to enter have a say.

NATO should add nations only if they increase the security of the whole.

And given the fact that the U.S. would do most of the heavy lifting in any conflict with nuclear-armed Russia, the critical question for Washington is whether adding a new member would increase Americans’ security.

Montenegro, a bit like the Duchy of Grand Fenwick of the novel The Mouse that Roared, is largely a nullity, a microstate with 2000 men under arms threatened by no one.

Podgorica’s membership didn’t help America, but it probably didn’t hurt much either.

Ukraine is a dramatically worse candidate on both political and security grounds.

Montenegro was a bit dubious.

The political systems of Bulgaria and Romania leave something to be desired.

Prospective members such as Kosovo and Macedonia have serious problems.

If democracy really mattered, Turkey’s descent into autocracy would put it outside the alliance.

Nominally democratic, the current president came to power after a street revolution against the previously elected, though notoriously corrupt, president.

At the recent EU-Ukraine summit following Europe’s approval of an Association Agreement, European Commission President Jean-Claude Juncker said: “What we are asking . . . is to increase the fight against corruption, because corruption is undermining all the efforts this great nation is undertaking.”

The human rights group Freedom House gave Ukraine a poor score, three of seven for both political rights and civil liberties, and an overall rating of “partly free.”

Freedom House warned that the failure to prosecute “extensive high-level corruption has undermined the popularity of the government and affected reform efforts in a wide range of sectors,” while “political pressure and attacks on journalists have threatened freedom of the press.”

State noted conflict-related abuses in the Donbass (though more by the separatists), “impunity from corruption and deficiencies in the administration of justice,” harsh treatment of prisoners, attacks on journalists, sexual trafficking and forced labor, failure to prosecute officials for human rights abuses, and a “climate of impunity.”

Russia’s support for separatists in the east obviously has contributed to Ukraine’s political instability and true reformers could eventually come to the fore.

However, the country suffered through a succession of authoritarian, corrupt, and incompetent leaders since the Soviet break-up.

Even without Moscow’s interference Ukraine’s politicians have consistently fallen short of providing the responsible leadership their people need.

Odds are poor on Kiev turning around in the next three years.

While Kiev’s political problems could be remedied, its security deficiencies cannot be so easily resolved.

Ukraine would be a huge security black hole for NATO and especially America.

So long as the alliance purports to have even a vague relationship to U.S. security interests, Ukraine has no place in NATO.

Historically Washington had little concern about a territory which spent most of the last two centuries as part of either the Russian Empire or the Soviet Union.

Ukraine was viewed as a “captive nation” whose liberation in 1991 was warmly welcomed.

But its independence, though seen as a moral good, didn’t matter much militarily.

True, the more pieces into which the Soviet Union broke, the better for a dominant America.

But the U.S. would vastly outrange whatever Russia emerged, irrespective of Kiev’s status.

Nothing has changed over the last quarter century.

An attempt to conquer Ukraine, which was hard enough for the Soviet Union to digest, would be a disaster for the Russian state.

But adding Kiev to NATO would also bring in Ukraine’s conflict with Moscow.

Of course, the Putin government is primarily in the wrong.

Grabbing Crimea was a crime of opportunity after the collapse of the Yanukovych government—albeit supported by many of the nominal “victims,” since Crimea once was part of Russia.

Encouraging ethnic-Russian separatists in the east has worked out less well for Moscow.

President Vladimir Putin may have overestimated support for secession or simply intended to weaken Kiev and keep the latter embroiled in conflict.

However, moral blame doesn’t change the fact that it’s a conflict in which Washington has no place.

America simply has no interest at stake worth confronting a nuclear-armed power.

Especially when Russia’s security interests are immediate, serious, and obvious.

The best way to understand Moscow today is as a pre-1914 great power, concerned about international respect and secure borders.

The U.S. and NATO ignored both when expanding the transatlantic alliance up to Russia’s borders, almost in sight of St. Petersburg.

Then came the allies’ support in 2014 for a street putsch against the elected Viktor Yanukovych, who leaned toward Moscow.

While this litany may not justify Russian policy, it certainly helps explain Putin’s actions.

And, truth be told, Washington would not react well if Russia helped oust a pro-American government in Mexico City.

Despite NATO’s official welcome to Kiev’s membership efforts, a number of European states remain deeply skeptical of its candidacy.

Moreover, all applicants are supposed to resolve any territorial disputes before they are eligible for inclusion.

That seemingly rules out Ukraine, but is true only so long as conflict rages in the Donbass.

So if Kiev is seeking NATO membership and the alliance is receptive, Russia has an incentive to keep the geopolitical pot boiling.

The U.S. and Russian governments, in consultation with the other NATO members, should go deep to forge a lasting peace.

The foundation of any agreement should be an American and alliance pledge that Kiev will not be inducted into NATO.

Moscow would not be exercising a veto.

Rather, America and Europe would be exercising good judgment about their own security.

Adding Ukraine to the alliance would make them less secure.

Russia would stay out of Kiev’s already fractious politics.

Ukraine would allow greater regional decentralization, especially in the Donbass.

Moscow would end its support for ethnic Russian separatists.

The U.S. and EU would lift economic sanctions on Russia.

Moscow should agree to hold an internationally monitored referendum and respect the result.

However, no Russian government is likely to yield Crimea under any circumstance, short of losing a general war.

After the annexation, Putin announced: “NATO remains a military alliance. I do not want to be welcomed in Sevastopol by NATO sailors.”

In which case the second best result might be official non-recognition but informal acceptance.

Of course, Kiev should be free to set its own policy.

However, the U.S. and Europe should indicate their intention to settle their dispute with Moscow, if at all possible.

Moreover, under no circumstance should the allies extend security guarantees to Ukraine.

The latter’s desire for NATO membership is understandable, but inimical to the interests of current members.

Instead of creating uncertainty, raising Kiev’s hopes while intensifying Moscow’s paranoia, the U.S. and its NATO allies should finally and firmly tell Ukraine no on joining the transatlantic alliance.

Then all parties could move on in search of a practical resolution to the conflict in Ukraine.