July 08, 2017
WASHINGTON, DC -- Moving closer to taking a more direct role in European-led efforts to end the conflict in Ukraine, the Trump administration on Friday appointed a former U.S. ambassador to NATO as special envoy for resolving the crisis. 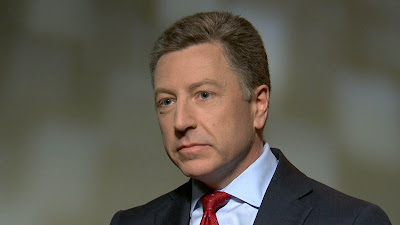 Secretary of State Rex Tillerson, who will visit Kiev this weekend, named Kurt Volker as special representative for Ukraine negotiations.

In that job, Volker will oversee U.S. efforts to press Ukraine and Russia to fully comply with the Minsk Agreement, which lays out a roadmap for reducing tensions in Ukraine's east.

The accord was worked out two years ago in the capital of Belarus by the leaders of France, Germany, Ukraine and Russia but has yet to be implemented.

Under the Obama administration, the U.S. had taken a hand's-off approach to Minsk, allowing the Europeans to take the lead.

Volker, a career diplomat and Europe specialist who also worked in the White House, is close to Sen. John McCain, a prominent critic of Russia's involvement in Ukraine and of the previous administration's approach to that intervention.

In announcing the appointment, Tillerson said Volker's "wealth of experience makes him uniquely qualified to move this conflict in the direction of peace."

He said the U.S. remains fully committed to the Minsk agreements.

The State Department said Volker would accompany Tillerson to Kiev on Sunday and then hold regular meetings with senior Russian, German and French officials.

He will "take responsibility for advancing U.S. efforts to achieve the objectives set out in the Minsk agreements," the department said.

Tillerson had been hinting for some time that he might appoint a special envoy to deal with Ukraine, a departure from his stated goal of reducing the number of such specialty posts at the State Department.

He told Congress last month that the United States remains committed to the goals of the Minsk agreements but suggested that the U.S. was not wedded to that format.

Administration officials said this week that the parties to the Minsk accords were seeking a greater U.S. role in the process and that an appointment was likely ahead of Tillerson's trip to Kiev.

The Ukrainian government has been fighting Russia-backed separatists in eastern Ukraine since 2014, after Russia annexed Ukraine's Crimean Peninsula. The fighting has cost over 10,000 lives.

The 2015 Minsk Agreement, which Ukraine signed as its troops were being driven back, has greatly reduced but not stopped the fighting, while attempts to fulfill its provisions for a political settlement, including greater autonomy for the east, have failed.

Known as Minsk II, it followed a cease-fire deal reached the previous year, also in Minsk.