July 17, 2017
AMSTERDAM, Holland -- Evert van Zijtveld doesn't want to talk about the 2014 plane crash in eastern Ukraine that took the lives of his two teenage children. He wants justice. 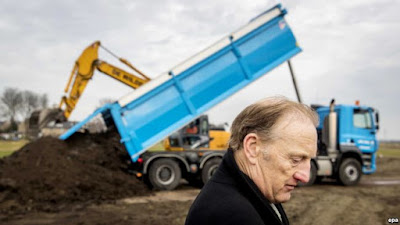 Evert van Zijtveld, whose children and parents-in-law died on Flight MH17, stands near the construction site of a Dutch memorial monument to the victims of the catastrophe.

But three years after the downing of Malaysia Airlines Flight MH17, the bereaved Dutch father -- who also lost his in-laws in the crash -- is still waiting.

As are the loved ones of all 298 passengers and crew killed when the Boeing 777 was shot down during what should have been a routine trip from Amsterdam to Kuala Lumpur.

"Whoever did it should be brought to justice. That's the only story I can share with anyone," van Zijtveld told RFE/RL by telephone on July 13, four days before the third anniversary of the disaster.

MH17 took off from Amsterdam's Schiphol Airport at 12:31 p.m. local time and headed east along its approved flight path.

After flying over Germany and Poland, the plane, as planned, vectored slightly south into Ukrainian airspace.

Air traffic controllers lost contact with the aircraft a little under two hours after takeoff, as it entered the airspace above territory controlled by Russia-backed separatists near the Russian frontier.

Soon afterwards, there were reports of a missing plane.

These were followed by footage of a crash site and witnesses speaking of dozens of bodies on the ground.

All 283 passengers -- including van Zijtveld's 19-year-old daughter Frederique and 18-year-old son Robert-Jan, who were on their way to Bali for a three-week holiday with their grandparents -- were dead.

None of the 15 crew members survived, either.

Of the victims, 189 were Dutch nationals, 44, including the crew, were Malaysian, 27 were Australian while there were also 12 Indonesians, 10 Britons, four Germans, four Belgians, three Filipinos, and one each from Canada, the United States, New Zealand, Hong Kong, and Ireland.

Some of the passengers on the plane were also dual citizens.

As questions about what happened began to arise, so too did confusion, misinformation and accusations over why MH17 plummeted from the sky.

A post on the Russian social media site VKontakte attributed to Igor Girkin, a Russian who was a commander of separatist militants at the time, claimed responsibility.

The same day, the separatists denied involvement and the post was taken down.

Communications intercepts made public later in July 2014 appeared to show separatists discussing an aircraft that they had downed and only afterward realized was a civilian jet -- not a warplane.

As the controversy swirled, grieving relatives became increasingly distressed and angry at a lack of answers to their questions about the crash.

In October 2015, the Dutch Safety Board concluded the plane was brought down by a Russian-made rocket and outlined the area from which it was fired, which was largely held by the separatists.

That was followed by a report by Bellingcat, a team of independent, open-source researchers, who said it had positively identified the actual Russian Buk missile launcher as the weapon that brought the passenger jet's flight to a fiery end.

And in September 2016, the Joint Investigation Team (JIT) that conducted the international investigation said it had determined that the Buk missile system had been brought into Ukraine from Russia shortly before MH17 was shot down and then quickly smuggled back to Russia afterward.

It said the missile was fired from a field in separatist-held territory.

U.S-born aviation attorney Jerome Skinner is leading a group of 33 next-of-kin of victims from Australia, New Zealand, and Malaysia who are suing Russia and its president, Vladimir Putin, in the European Court of Human Rights for $330 million.

Skinner says the overwhelming evidence can only lead to one conclusion.

"Do you really think that you have no responsibility to the families of the 80 children on board?"

Skinner asked Putin in an open letter on July 12.

"What about all the others? Did you see the dolls, coloring books and toys among the blood and carnage? Did you see the photo of the hardened rebel fighter holding the soiled teddy bear like a prize from a carnival?"

"My clients have waited three years, Mr. Putin. There is still no accountability.... You stand as the only man who can set this right," he wrote.

Despite the evidence, and so many fingers pointing at Russia's involvement in the crash, the Kremlin has denied involvement.

Russia has likewise rejected accusations, backed by plentiful evidence, that it has sent weapons and troops into eastern Ukraine to support the separatists in a war that has killed more than 10,000 people -- including the victims of MH17 -- in eastern Ukraine.

Ukraine's ambassador to the Netherlands, Vsevolod Chentsov, says that while the conventions of the Council of Europe oblige Russia to provide mutual legal assistance in criminal matters such as the MH17 case, "taking into account the position of the Russian Federation on the issue of MH17, we can assume that such interaction is, to put it mildly, difficult."

"Everything will depend on political will on the part of the Russian Federation," he said, adding that "it is important to depoliticize the future judicial process, to avoid even hypothetical allegations of bias."

Though no suspects have been named, some progress is being made in the investigation.

In a July 13 commemoration of the crash anniversary, Malaysian Transport Minister Datuk Seri Liow Tiong Lai told reporters that more than 200 people had been questioned in the case and that he expected charges to be laid by the end of this year -- or early in 2018 -- against at least some of the perpetrators.

"We also want the person who launched the missile to come forward and tell us what happened on that day," he said.

"This was a tragic incident and we will ensure we can claim justice for the family members of the victims."

Headway is also being made on the legal front.

On July 5, the Dutch Foreign Ministry said any suspects in the downing of MH17 will be prosecuted in a court in the Netherlands after an agreement was reached by the countries jointly investigating the crash: Australia, Belgium, Malaysia, Ukraine, and the Netherlands.

In announcing the deal, Dutch Foreign Minister Bert Koenders said those countries will continue to cooperate on the prosecution and that the trial will cover all of the victims.

"In this way, the JIT countries are jointly heeding the UN Security Council's call to hold those responsible for this incident to account," Koenders said.

"We have every confidence that we can continue to count on broad international support. And I will continue to do my utmost to ensure that this remains the case."

Whether or not that raises the hopes of van Zijtveld and others who lost loved ones in the crash, Skinner wants more.

"Some think MH17 must have been a terrible, inevitable mistake of war. I do not think that is the truth. The facts scream intent and motive. It was a calculated military strike as willful as the killing of one more political opponent. You stand as the only man who can set this right," he told Putin in his letter.

"I will use the European Court of Human Rights and every other avenue available to bring the Kremlin to accountability.... Meet me and finally make amends for the victims of this tragedy."