This Is What Would Happen If Ukraine Joined NATO 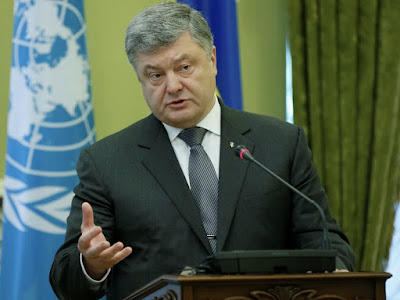 "Today we clearly stated that we would begin a discussion about a membership action plan and our proposals for such a discussion were accepted [by Stoltenberg] with pleasure," Poroshenko told reporters while standing next to the NATO chief.

"We are also here to demonstrate NATO's solidarity with Ukraine and our firm support for the sovereignty and territorial integrity of your country," Stoltenberg told reporters.

The majority of Ukrainians want their country to join NATO too.

A poll by the Democratic Initiatives Foundation in June found that about 69% of Ukrainians favor joining.

The Ukrainian parliament also passed a resolution that month in support of becoming the 30th member of NATO.

Ukraine must still pass a number of economic and anti-corruption reforms before becoming a member.

Poroshenko acknowledged this on Monday, pledging to "build a genuine program of reforms" and "have a clear schedule of what must be done by 2020 to meet the NATO membership criteria."

But John Herbst, former US ambassador to Ukraine and current director of the Atlantic Council's Eurasia Center, told Business Insider that "2020 is an optimistic scenario."

Herbst said Ukraine probably wouldn't be able to join for another 10 years or more because the European NATO members "are anxious about provoking Moscow."

In order to join NATO, Ukraine also cannot have any territorial disputes, which it does in Crimea and the Donbass, an eastern area of the country where Kiev has been battling Russian-backed separatists since 2014.

Nevertheless, if Ukraine became a member, "you can't rule out additional aggression by Moscow," Herbst said.

But at the same time, "Moscow would be limited in how it would respond" because its aggression is already causing it "probems in terms of sanctions and international isolation" — such as their removal from the G8 in 2014.

Russia has been using hybrid warfare techniques against the former Soviet satellite since the 2014 Ukrainian revolution.

At least 13 high-profile assassinations in Ukraine have been linked to Russia in the last three years, and Ukraine has also been the victim of multiple cyberattacks thought to be perpetrated by the Kremlin, most recently the Petya attack on June 27.

The US and NATO have already begun to help Ukraine defend against such attacks.

Stoltenberg pledged on Monday that NATO would give Ukraine more hardware to defend against cyberwarfare attacks.

Members of the Oklahoma National Guard are helping train Ukrainian troops, and the US recently announced that it would help provide Ukraine with more defense military equipment.

This is the kind of support — equipment, military training, intelligence — that would be increased, Herbst said, if the war ended and Ukraine joined NATO.

But, he said, "Russia's behavior in Ukraine suggests they're willing to do extreme things to achieve their ends."

And until Russia has a "less beligerent president," Herbst added, Ukraine may not become a NATO member.