Separatists Proclaim A New State To Replace All Of Ukraine

July 19, 2017
MOSCOW, Russia -- Separatists in eastern Ukraine on Tuesday proclaimed a new state that aspires to include not only the areas they control but also the rest of the country. 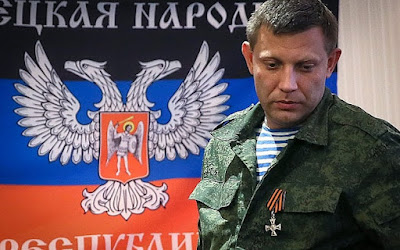 But Russia, their chief backer, sought to play down the announcement, saying it was merely part of public discussion.

The surprise announcement in the rebel stronghold of Donetsk casts further doubt on the 2015 cease-fire deal that was supposed to stop fighting in Ukraine's industrial heartland and bring those areas back into Kiev's fold while granting them wide autonomy.

Some rebels said they have no intention of joining the new state.

More than 10,000 people have died in fighting since Russia-backed rebels took control of parts of Ukraine's Donetsk and Luhansk regions in April 2014 after Russia annexed Ukraine's Crimean peninsula.

The rebels originally sought to join Russia but the Kremlin stopped short of annexing the area or publicizing its military support for the rebels.

Donetsk separatist leader Alexander Zakharchenko said in comments broadcast on Russian television that rebels in Donetsk and Luhansk as well as representatives of other Ukrainian regions would form a state called Malorossiya.

Most of the areas which are currently part of Ukraine were referred to as Malorossiya, or Little Russia, when they were part of the Russian Empire.

Zakharchenko said they are drawing up a constitution that would be put up to a popular vote.

"We believe that the Ukrainian state as it was cannot be restored," Zakharchenko said in remarks carried by the Tass news agency.

"We, representatives of the regions of the former Ukraine, excluding Crimea, proclaim the creation of a new state which is a successor to Ukraine."

Although separatists in the east have some sympathizers in other Ukrainian regions, they have not attempted to capture territories there, nor do they have any political representation there.

France, Germany, Ukraine and Russia worked out an agreement in the Belarusian capital, Minsk, in 2015 which laid out a roadmap for ending the conflict between government troops and separatists.

Under the deal, the rebels would return control of the territories they had captured to Kiev while Kiev would allow a local election there and grant wide autonomy to the region.

While the deal helped to reduce the intensity of fighting, none of the political components has been implemented.

"This initiative does not fit with the Minsk process," Gryzlov told Russian news agencies.

"I see it merely as an invitation for discussion. This announcement does not have entail any legal consequences."

While the separatists are believed to be guided by the Kremlin, they have made statements in the past that clearly caught Moscow off guard.

Yevgen Marchuk, Ukraine's envoy at the talks, said on the 112 television channel that the announcement, made one day before the next round of talks in Minsk, "could block the negotiations entirely."

In Luhansk, rebel leaders denied that they were part of the deal.

Local news website Luhansk Information Center quoted rebel representative Vladimir Degtyarenko as saying they had not been informed of the plans and have "great doubts about the expediency of such a step."

Separatist leaders in Luhansk, unlike their counterparts in Donetsk, have tended to stay away from directly expressing intentions to join Russia.

Ukrainian President Petro Poroshenko on Tuesday accused Russia of directing the rebels' hand in making the announcement and seeking to split Ukraine in pieces.

"You should understand that Zakharchenko and (rebel leader) Plotnitsky are not political actors," he said, dismissing them as "puppets" whose only job is to voice "the messages they receive from Russia."

Poroshenko said Ukraine is committed to the peace accords and pledged to restore control over eastern Ukraine and Crimea.

Kiev-based political analyst Volodymyr Fesenko speculated that the Kremlin had instigated the announcement, perhaps trying to scare the West with a possibility of Ukraine's breakup.

"The Kremlin is no longer trying to push this malignant tumor back into the body of Ukraine," Fesenko said, adding that it is too early to predict the fallout of Tuesday's announcement because Zakharchenko is known for making outlandish claims.

The Associated Press has documented how Moscow has been propping up the separatists in Ukraine with funds, weapons and recruits.

The Kremlin has firmly denied sending Russian troops to fight alongside the separatists despite the overwhelming evidence.