Russian Military Says Fighter Detained In Ukraine Was Discharged In 2016

July 12, 2017
KIEV, Ukraine -- The Russian military has denied that a Russian man who was detained by government forces in eastern Ukraine in June is an active-duty serviceman. 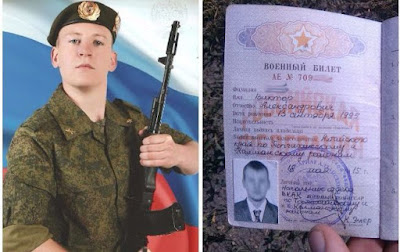 Viktor Ageyev, who was captured by Ukrainian soldiers in Luhansk region, claims he has a valid contract with the Russian Defense Ministry.

Footage in which Viktor Ageyev said he was serving in the Russian armed forces on a contractual basis when he was captured was broadcast in Ukraine on July 9.

In a statement released late on July 10, Russia's Southern Military District said that Ageyev was discharged from the military in spring 2016 and now "has nothing to do with the Russian Army."

Despite ample evidence, Russia denies accusations by Kiev and the West that it is providing weapons, training, and personnel to support separatists fighting government forces in a conflict that has killed more than 10,000 people in eastern Ukraine since April 2014.

In Kiev on July 10, NATO Secretary-General Jens Stoltenberg has called on Russia to remove what he said were thousands of its soldiers from Ukraine "and stop supporting the militants with command-and-control and military equipment."

The Russian denial that Ageyev was an active soldier at the time of his detention echoed developments following the capture of two other Russians, Aleksandr Aleksandrov and Yevgeny Yerofeyev, in May 2015.

Aleksandrov and Ageyev were both sentenced to 14 years in prison in May 2016, after being convicted of fighting alongside the Russia-backed separatists in eastern Ukraine.

They were later returned to Russia as part of an exchange for Ukrainian military aviator Nadia Savchenko.