July 24, 2017
KIEV, Ukraine -- Russian aggression is to blame for violence in eastern Ukraine, where people are dying in what should be seen as a "hot war" rather than a "frozen conflict", the U.S. special envoy to Ukraine peace talks said on a visit to Ukraine on Sunday. 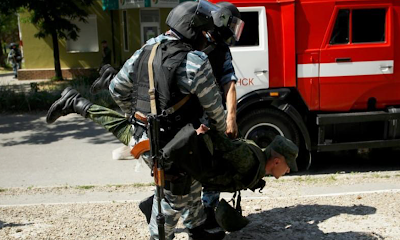 Members of the self-proclaimed Luhansk People's Republic's Berkut police carry a man acting as a victim of a terrorist attack, during an anti-terrorism drill in the rebel-held city of Luhansk, Ukraine, July 21, 2017.

Kurt Volker, a former U.S. ambassador to NATO, was appointed to his current role on July 7 to help resolve the conflict between Ukrainian troops and pro-Russian separatists, which has killed more than 10,000 people since 2014.

Washington cites the conflict as a key obstacle to better relations with Russia.

On a visit to the Ukrainian-held town of Kramatorsk, 690 km (430 miles) southeast of Kiev, Volker said he would prepare a set of recommendations on how Washington can better engage with the peace process.

"This is not a frozen conflict, this is a hot war, and it's an immediate crisis that we all need to address as quickly as possible," he said.

Relations between Ukraine and Russia went into freefall after Moscow's 2014 annexation of Crimea and the subsequent outbreak of a pro-Russian insurgency in the eastern Donbass region.

Ukraine accuses Russia of sending in its own soldiers and military equipment, which Moscow denies.

Volker replied in the affirmative when asked whether he saw the conflict as being as the result of Russian aggression rather than internal Ukrainian factors.

Fighting in the Donbass region has killed 12 people in a particularly bloody week, prompting Germany and France to urge immediate progress in implementing ceasefire agreements signed in Belarus in 2015 that are regularly flouted.

Leaders of France, Germany, Ukraine and Russia will speak by phone on Monday to discuss the conflict.

U.S. Secretary of State Rex Tillerson said in early July that Russia must make the first move to bring peace to Ukraine, which President Petro Poroshenko called a powerful signal of Washington's backing.

A career diplomat, Volker is a former aide to Republican Senator John McCain, a Russia hawk who wants the United States to supply lethal weapons to Ukraine, a move the previous administration under Barack Obama shied away from.