In Ukraine, Cardinal Sandri Says There's Hope For The Future

July 13, 2017
KIEV, Ukraine -- Shortly after Pope Francis donated money to help those suffering from Ukraine's ongoing conflict, Cardinal Leonardo Sandri arrived in the country, saying that while pained, he sees hope for the future. 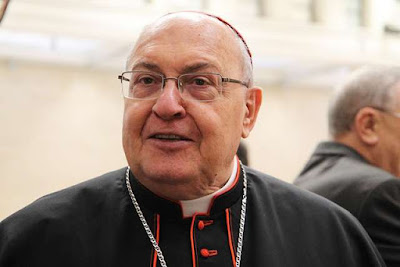 Cardinal Leonardo Sandri, the Prefect of the Congregation for the Oriental Churches and Grand Chancellor of the Pontifical Oriental Institute.

In comments to local Catholic media after landing in Ukraine July 11, Cardinal Sandri recalled that when he made his first trip to the country several years ago, it was because “in this land was born and is growing, a great hope, a great vision of the future for this Christian country.”

“Today, unfortunately, I also bring pain for a country that ought to be the vanguard of peace in the life of Europe, but which instead is suffering, in all of it's inhabitants, many deprivations and many victims of this situation,” he said, referring to the ongoing conflict in Ukraine's eastern region.

Because of this, he said, “I also come with a desire for hope for life and a great future of this beloved country.”

Cardinal Sandri, Prefect of the Vatican's Congregation for Oriental Churches, is currently on an official July 11-17 visit to Ukraine to participate in the national Pilgrimage to the Shrine of Zarvanytsia.

He offered his comments to Zhyve TV, which is the Catholic TV Station of Ukrainian Greek Catholic Church, after his arrival.

His visit falls in the midst of ongoing upheaval in the country, largely the result of political instability and tensions surrounding the Russian invasion of their eastern region in 2014, which prompted a conflict that has endured three years, claimed thousands of lives and displaced millions of others.

Conflict erupted in Ukraine in November 2013, when the former government refused to sign the Association Agreement with the European Union, leading to months of violent protests.

Tensions deepened in February 2014, when the country’s former president was ousted following the protests, and a new government appointed.

In March of that year, Ukraine’s eastern peninsula of Crimea was annexed by Russia and pro-Russian separatist rebels have since taken control of eastern portions of Ukraine, around Donetsk and Luhansk.

More than 10,000 people, including civilians, have died in the fighting between Ukraine's military and pro-Russian separatists.

Roughly two million others have been forced to flee due to violence and a lack of basic humanitarian necessities, and those who remain lack access to food, heating and medical supplies.

Last April Pope Francis announced that he would be taking up a special collection in all European churches in order to provide relief from those who are still suffering.

In December 2016, the Pope made an initial donation of 6 million euros ($6.8 million) from the funds collected, asking that it be distributed to different charitable projects.

In his comments to Zhyve TV, Cardinal Sandri said it was “an immense joy” for him to be back in the country after three previous visits, including one with St. John Paul II.

“I come particularly because I was invited to the celebration of the Madonna of Zarvanytsia, so I come to bring to her, the Queen of Ukraine, all the veneration we have for her in the Roman Church, but which we know summarizes the Marian identity of the Ukrainian people,” he said.

The cardinal also offered to Archbishsop Shevchuk and all bishops and faithful in Ukraine, “the greeting, blessing and closeness of the Pope, Francis.”

After his arrival, Sandri traveled to the capital city of Kiev alongside the Vatican's nuncio to Ukraine, Archbishop Claudio Gugerotti, and Sviatoslav Shevchuk, Major Archbishop of the Greek-Catholic Church in Ukraine.

While there, he had a moment of silent prayer in front of the Cross of Maidan Square, where he laid flowers in honor of those who lost their lives during the bloody riots of 2014.

From there, he visited the Museum of the Holodomor, making a symbolic gesture in memory of the more than 100 victims.

On Wednesday, July 12, which marks the Feast of Saints Peter and Paul on the Giulian calendar, he will participate in the Pontifical Divine Liturgy at the Cathedral of the Resurrection, offering the homily.

After, he is expected to pray at the tomb of Cardinal Lubomyr Husar, Major Archbishop Emeritus of Kiev-Halych and former head of the Ukrainian Greek-Catholic Church, who died May 31.

Later, the cardinal will hold a meeting with seminarians before leaving for the central-eastern city of Kharkiv, where he will visit the local Caritas.

The next day, July 13, Cardinal Sandri will take part in the Divine Liturgy at the cathedral of the Exharkate of Kharkiv before heading to lunch with priests and various other guests.

He is then expected to meet with the Bishop of the Ukrainian Orthodox Church, Metropolitan Nicodemus.

In the afternoon he will travel roughly 124 miles to Kramatorsk, where on Friday morning he will celebrate Mass and meet with the local bishops and priests of Donesk.

After paying a visit to the local Caritas and a community center, Sandri is scheduled to stop in the town of Sloviansk, where he will meet with several individuals who have been internally displaced by the conflict.

On Saturday, July 15, the cardinal will hold a meeting with the Greek-Catholic Metropolitan Bishop Volodymr Viytyshyn before joining the annual pilgrimage to the Shrine of Zarvanytsia.

That night, as part of the pilgrimage, Sandri will lead a special meeting with young people before leading a reflection at the close of the procession of candles.

Cardinal Sandri will then preside over Mass Sunday before traveling to Lviv, where he is scheduled to visit the Greek-Catholic Cathedral Saint George and pray at the tombs of Metropolitan Bishop Andrey Sheptytsky and of Cardinal Joseph Slipyj, heads and fathers of the Ukrainian Greek-Catholic Church for a large portion of the 20th century.

He will then hold a brief meeting with the Roman Catholic Archbishop of Lviv, Mieczyslaw Mokrzycki, before heading back to Rome.

According to the website of the apostolic nunciature in Ukraine, Pope Francis has, through Cardinal Sandri, offered all Catholic and Orthodox faithful in Ukraine, his personal greeting and blessing.

The Pope also expressed his “affection and closeness to the population for the sufferings and deprivations they have and are enduring during the well known conflict,” and encouraged those working for peace and reconciliation, as well as those engaged in assisting the displaced.