July 23, 2017
KIEV, Ukraine -- As clashes drag on in east Ukraine between government forces and Russian-backed rebels, health activist Natalia Hurova is fighting another battle of her own. 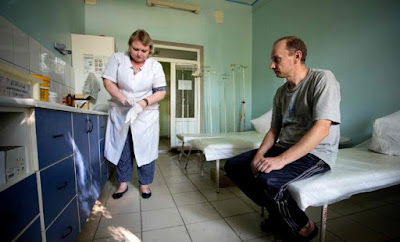 A patient waits to be treated in the toxicology unit in a hospital treating drug users in the rebel capital of Donetsk on July 11, 2017.

Hurova manages a project in her insurgent-controlled home city of Luhansk handing out clean syringes and condoms to drug-users and sex workers who are most at risk from HIV and hepatitis.

That puts her at the forefront of the perilous struggle against the spread of infections as more than three years of conflict and rebel rule have hit vital treatment programs.

“Everything has worsened,” Hurova, from the All-Ukrainian Public Health Association, a charitable organization, told AFP.

Getting supplies such as condoms, lubricants and hygienic wipes into rebel-held territory remains a constant challenge as they run the gauntlet of checkpoints to cross the tightly guarded frontline.

While Hurova still manages to keep these programs going, substitute treatments for drug addicts including methadone have stopped entirely.

This has seen users who were being weaned away from injecting themselves turn to dangerous local alternatives — and bolstered the threat of the spread of diseases.

“There are more cases of HIV infections among users and it is very difficult to make contact with them,” Hurova said.

Alongside this problem, activists say there has been a rise in the number of sex workers in the grey zone along the frontline.

Prior to the start of the conflict in April 2014, ex-Soviet Ukraine — especially in its eastern regions of Donetsk and Luhansk — was already battling one of the most severe HIV epidemics in Eastern Europe.

But thanks to progressive policies the country was making progress and had managed to reduce the rate of HIV infections, most dramatically among young drug users.

After the war flared up in 2014, experts soon warned that the conflict risked jeopardizing any gains that had been made.

As Kiev lost control over Donetsk and Luhansk, health services and key treatments for infections were hit.

In 2015, international actors managed to stave off an imminent crisis by negotiating with Kiev and the rebels to keep supplying antiretroviral drugs to thousands of HIV positive people in the separatist territories.

Emergency funds were provided and the United Nations now estimates that about 10,000 adults and children with HIV in rebel-held areas are receiving the drugs.

But while negotiations have been successful in getting the most urgent treatments through for now, in terms of prevention the situation still looks dire.

Doctor Ihor Pirohov, who works at a hospital treating drug users in rebel capital Donetsk, said that the war has seriously disrupted attempts to curb addiction.

“Most of our patients put on a uniform, got a weapon and went off to fight” for the insurgents, Pirohov said.

“Many even said openly that they were using more drugs during the war than when it was peaceful.”

The internationally approved opioid replacement treatments that had become the norm in Ukraine have ended.

Due to security restrictions the Ukrainian authorities say they are unable to deliver substitute drugs across the frontline.

For their part the rebels seem to have followed in the footsteps of their backers in Russia — where methadone is banned — and turned the clock back on progressive treatments.

Activist Hurova said that about 900 patients had lost access to the methadone program, leading many to turn instead to dangerous local alternatives.

At the same time she said more women around the conflict zone have turned to prostitution — also putting them at greater risk.

“There are no jobs, no work, no earnings — this is the only option for them — so it all leads to an increase in the number of sex workers,” she explained.

As it has waged war against the insurgents on the battlefield, the government in Kiev has shown a tendency to disown the health crisis in rebel regions.

While the situation in areas under insurgent control has deteriorated, the rest of the country has continued to make headway tackling HIV as authorities have pushed on with the policies that were yielding results.

“The decline in the rates of HIV epidemic growth is encouraging,” Pavlo Skala from the Alliance for Public Health told AFP.

But experts warn that any improvements being made risk being undermined by a uptick of infections in Ukraine’s rebel-held regions and that Kiev cannot turn a blind eye to the problems happening across the frontline.

“Soldiers stand on the demarcation line between the two territories and they can control the border,” Skala said.

“But they cannot control the spread of epidemics.”