In Brief Visit, Tillerson Changes The Conversation On Ukraine

July 14, 2017
BERLIN, Germany -- Lost in all the attention focused on President Putin's presumed meddling in the 2016 US election is the changing state of Russia's ongoing undeclared war on Ukraine. 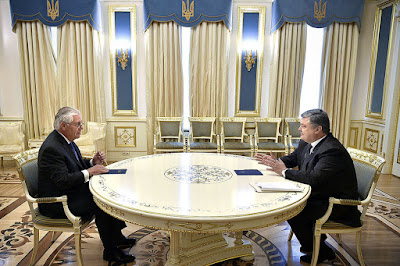 US Secretary of State Rex Tillerson (L) visited Ukraine last weekend and signaled clearly that the US is engaging more robustly with the pro-Western Kiev government.

But in his brief stop in Ukraine on Sunday, US Secretary of State Rex Tillerson brought it to the fore, scoring a judo flip on the Russian judo master.

The big question last week was the West's worry that President Trump might reach a strongman deal with Putin that would sacrifice Ukrainians to Moscow’s dominance in return for a vague promise of Russian restraint in, say, Syria.

But this week, the big question belongs to Putin, who now fears that Ukrainians’ continuing enthusiasm for Western democracy and rule of law might sway his own Russian subjects.

In other words, Putin’s military brashness when he started his undeclared war on Ukraine in 2014 by annexing Crimea has become a vulnerability in 2017.

The West, which has struggled to confront Putin’s attacks on Europe’s 70-year-old system of peace and integration, is rediscovering its own resilience.

Putin, meanwhile, is rediscovering the fundamental weakness of his country's economy and politics, exposed by Ukraine's defection from centuries of East Slav fraternity with Russia.

Within Russia, jingoist pride in seizing neighboring countries' territory is losing some of its mobilizing power.

Alexei Navalny’s nascent campaign to challenge Putin in the next presidential election is gaining strength, and while Mr. Navalny does not opposes Russia’s intervention in Ukraine, the growing popularity of an independent challenger to Putin would have been unthinkable during the euphoria of Crimean annexation.

Putin, an old KGB hand who doesn't understand the self-organizing power of Ukraine’s vibrant civil society, may attribute it to manipulation by Ukrainian and Western secret services.

Yet he himself was the one who united Ukrainians in a historically unprecedented anti-Russian identity through his war, at a cost of more than 10,000 dead and 1.8 million Ukrainian refugees.

By now, even Russian-speaking Ukrainians in the eastern part of the country (who long mistrusted western Ukrainians), are converging with their compatriots for an overall 57 percent who hold "cold" or "very cold" feelings toward Russia.

First, he said Washington will not lift the financial sanctions it imposed on much-needed Western investment in Russia until Russia returns the territory they seized from Ukraine.

Second, he signaled that the US is finally bringing its muscle to the desultory Minsk peace talks on the “separatist” eastern Donbass that is in fact controlled by 5,000-10,000 rotating Russian troops.

He also said that Moscow must take the first step in stopping violations of the cease-fire agreements of 2014 and 2015.

Mr. Volker is a protégé of Sen. John McCain (R) of Arizona, and, like Mr. McCain, publicly endorsed delivering defensive weapons to Kiev in 2014 and campaigned against letting Putin “[call] NATO’s bluff.”

Volker won’t be calling for NATO action against Russia, but he will surely revive the debate about providing high-tech defensive weapons to Ukraine’s surprisingly robust Army.

Fourth, Tillerson is now reviving the alliance between the West’s financiers of the pro-Western regime in Kiev and the embattled young reformers in Ukraine’s parliament, media, and civil society.

In the absence of existing democratic institutions, this is the only engine that might make deep enough reforms to break the business-political collusion that has not yet been rooted out in Ukraine.

The reformers provide the intelligence; the West withholds money if reforms continue to be blocked.

Tillerson publicly warned President Petro Poroshenko and other oligarchs that if they do not clean old judges out of the courts and guarantee rule of law, Western investors will stay away.

Pointedly, Tillerson met first with reformers, including Mustafa Nayyem, the Afghan-Ukrainian who started the Maidan demonstrations that toppled the old regime in 2013.

Tillerson’s gamble could, of course, be halted by one contrary 3 a.m. tweet from his boss.

But until that happens, the secretary of State is creating a new fait accompli on the ground in Ukraine that is no doubt catching the Kremlin’s attention.