July 24, 2017
PARIS, France -- French President Emmanuel Macron has said he will call the leaders of Russia, Germany, and Ukraine on July 24 in a stepped-up international effort to end the fighting in eastern Ukraine. 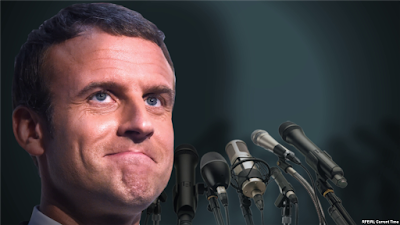 The holding of the Normandy format talks between Macron and Russian President Vladimir Putin, German Chancellor Angela Merkel, and Ukrainian President Petro Poroshenko is part of a continuous effort by the four countries to resolve the conflict in which Russia-backed separatists are fighting Ukrainian troops.

More than 10,000 people have died in the conflict, which began in early 2014, with hundreds of thousands of others forced to flee their homes.

A cease-fire agreement signed in February 2015 in the Belarusian capital, Minsk, has failed to end the violence, which has recently flared up and led to at least 11 Ukrainian soldiers being killed in recent days.

The French president's announcement comes one day after the United States announced that special envoy to Ukraine Kurt Volker will travel to Kiev for talks.

The State Department said Volker, a former U.S. ambassador to NATO, will meet in Ukraine with those who "have been affected by Russian aggression."

He will also visit Brussels, France, Austria, and Britain in an effort to find a "path to restoring Ukraine's sovereignty and territorial integrity."

Moscow denies involvement in the conflict despite compelling evidence that Russia has supported the separatists financially and militarily.