Freedom Isn’t Free: An Independence Day Reminder From the War In Ukraine

July 04, 2017
KIEV, Ukraine -- I arrived in Ukraine for the first time in July 2014, three years ago this month. I originally planned to stay for three weeks. I never would have thought then, that by Independence Day 2017, three years later, I’d still be here, still reporting on the war. 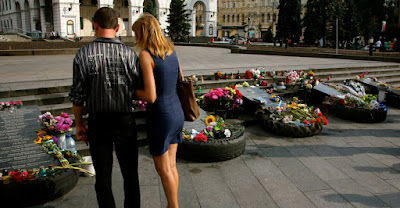 “Freedom isn’t free,” the author overheard a voice say on the streets of Kiev in July 2014.

On that warm summer day of my arrival in Kiev three years ago, the taxi from the airport dropped me off at the top of Institutskaya Street, as it was still called at the time.

(Today, it is Heroes of the Heavenly Hundred Street, in honor of the 100 protesters who died in the February 2014 revolution.)

Trees green with summertime leaves lined the cobblestone street as it steeply ascended from the Maidan, Kiev’s central square and epicenter of the revolution.

Young couples in shorts and flip-flops walked past holding hands.

Police officers on their beats acted relaxed, smiling and joking.

On that day, there was little evidence of the barbaric scenes that played out on this street in February 2014, five months prior to my arrival.

Yet, beneath the veneer of what could have been a normal summer day in any European capital, there were reminders of what happened there half a year earlier.

At that time, long sections of the brick sidewalk lining then-named Institutskaya Street were stripped bare, revealing earth beneath.

Five months earlier, protesters had peeled away the bricks to build a defensive wall against gunfire from a special police force called the Berkut, which deposed Ukrainian President Viktor Yanukovych had unleashed on the crowds calling for his ouster.

On that day, workers pounded new bricks into the naked soil.

Others sprayed water on the black stains that dotted the stone floor of the Maidan’s open expanse, erasing the traces of Molotov cocktails and the mounds of tires protesters had burned to provide a smokescreen from the snipers.

Of all the sights and sounds I encountered along Institutskaya Street on that day in July 2014, one stood out.

I heard English spoken in an American accent.

So my ears naturally homed in on the only understandable voice.

Just past the Hotel Ukraine, where Heroes of the Heavenly Hundred Street rounds the top of the hill overlooking the Maidan, there is a patch of open ground and a low wall off to one side.

This is a place of mourning.

In July 2014, the ground here was covered in framed photos, candles, and flower garlands.

The bullet holes are still there today.

On that day in July 2014, my first in Ukraine, a crowd lingered around this otherwise ordinary patch of earth.

The mood was quiet and somber.

Most people walked around with their arms folded across their chests.

Some held a hand over their mouths.

It was an unusual break from typical Slavic stoicism.

Two groups of framed photos nestled within beds of flowers and candles were arranged on the ground like a church congregation, with a cross made out of red glass candle holders in the center.

The faces on the photos were of the fallen.

Old and young, men and women, students and professors.

Hardly the neo-Nazi fascists carrying out a CIA-sponsored putsch as Russian media had depicted.

Families paused before the photos.

Parents pointed to the memorials, trying to explain to their children what went on here, and, I imagined, what it all meant for their future.

Three years later at this spot, there is now a metal memorial with engraved faces of the dead.

A flower garden grows on that patch of earth where so many died three years ago.

Prior to my arrival in 2014, I had watched a YouTube video of what had happened at this place during the revolution.

The sky was gray in the video, and the trees were bare.

Snipers hidden in the surrounding rooftops gunned down the protesters one by one as they ascended the street.

Some dropped dead in a flash.

Others folded to the ground like in slow motion.

Eventually, the dead clustered where they had collectively sought shelter in their final moments.

The protesters were unarmed.

They wore motorcycle helmets and wielded shields fashioned out of the top of garbage bins and road signs for protection.

As sniper fire cut down one wave of protesters at the top of the hill, their comrades would rush up to drag the dead and wounded away.

After depositing the casualties in the nearby Hotel Ukraine lobby, the survivors did something amazing.

They turned around and went back.

It’s hard to know, of course, the inner motivations of those protesters who walked head-on into sniper fire.

Clearly, something powerful was motivating them.

It had to be, because moving toward the sound of gunfire is terrifying, and one has to be motivated by something more powerful than the fear of dying to do it.

At lunch in Kiev a few weeks after my arrival in 2014, a Ukrainian friend explained to me the mood in Ukraine.

Elena Milovidova, then a 29-year-old journalist, said there was a wave of patriotism throughout the country she had never seen before.

She said there was a sense of shared responsibility among Ukrainians to live up to the sacrifices of the protesters.

“We don’t want it to be for nothing,” Milovidova told me about the revolution.

“Ukrainians are very patriotic now. And if things go back to the way they were before, there will be another Maidan.”

Milovidova explained how her family was torn, like many families in Ukraine, due to her mixed Russian-Ukrainian heritage.

She was proud to be Ukrainian, though, and she was proud of what the protesters did for her country.

Most Russian-speaking Ukrainians felt the same way, Milovidova told me, and the idea that Ukraine was somehow split along ethnic or cultural lines was a fiction created by Moscow.

On the streets of Kiev, signs of the country’s reborn patriotism were subtle, but prolific.

The same ribbons were tied to the radio antennas on cars and to tree branches.

On St. Andrew’s Descent, a culturally eclectic hillside enclave in Kiev not unlike Montmartre in Paris, artists sold paintings of scenes from the revolution.

It’s still like that, by the way, three years later.

Ukraine’s newfound patriotism was fueled by pride in the courage of its young people.

Like Valentyn Onyshchenko, who was 21 years old when he took part in the revolution.

He was shot by a 9 mm bullet from a pistol.

Luckily, the round hit his metal belt buckle, he said, and aside from a nasty bruise, he was left unharmed.

“When I fell off the barricade, they were yelling, ‘Another man down,’” he told me.

“And then they grabbed my arms and started to pull me away, but I just popped up and told them I was OK. They couldn’t believe it.”

Onyshchenko had a recurring dream of a man he saw cut down by a sniper during the revolution.

In the dream, the man rose up and spoke to Onyshchenko from the grave.

His face death gray and a bullet hole in his head.

“I was running and this guy was shot in the head by a sniper right in front of me,” Onyshchenko said.

“His brains flew into my face and broke my glasses. But it was crazy, you know, my first thought was, ‘OK, there’s a McDonald’s right over there, I can go there to wash off my face.’”

After the revolution, Onyshchenko’s friends convinced him to see a psychiatrist.

He was resistant to the idea at first, he said.

Like most young men who have experienced combat, he was more worried about appearing weak than any physical danger.

The dreams of the dead man have gone away now, Onyshchenko said.

“I think the psychiatrist really helped me,” he confessed.

Over dinner in 2014, Natalia Portier, another Ukrainian friend, told me she was more patriotic than she had ever been.

Her job in Kiev was sending her to the U.S., and she had to apply for a visa.

I assumed with my reflexive American pride that she would be excited about this.

The truth was, Portier, then 30 years old, felt guilty about leaving her homeland in time of war.

She had a brother, she explained, and she was afraid he would be mobilized to fight in the east along with the 60,000 Ukrainian troops currently deployed there at that time.

There are, incidentally, still about 60,000 troops serving in the eastern war zone as of July 2017.

“The world is so cruel,” Portier said to me three years ago.

She shook her head, looking past me.

But then she beamed when a man walked into the pub wearing a T-shirt with a trident on it, Ukraine’s national symbol.

“It’s not so unusual to see that now,” she said, smiling.

“I’m so proud of my country and to be Ukrainian. I hope this stupid war ends soon.”

As a veteran of the wars in Iraq and Afghanistan, I know what it’s like to serve in a war zone.

And as someone who was a 19-year-old cadet at the Air Force Academy on Sept. 11, 2001, I also know what inspires young men and women to go to war.

The young soldiers I’ve encountered in Ukraine, destined for the front lines in the east, wear a combined look of fear and youthful exuberance that I remember seeing on young U.S. soldiers in other war zones.

And the combination of pride and worry felt by the families those Ukrainian soldiers have left behind is no different than what my own family endured when my brother and I deployed to Afghanistan and Iraq.

After three years of war, most Ukrainians still believe freedom is worth the fighting for.

“The revolution was never about Russia,” Milovidova explained to me in 2014.

“It was about making Ukraine better. No one thought this war would happen.”

Three years later, the words of that lone voice from my first day in Kiev are still fresh in my mind.

Especially on a day like Independence Day, when I reflect on my own country’s virtues, on why my generation spent our youths in war, and on what our sacrifices ultimately accomplished.

As I see a young Ukrainian woman blowing a kiss to a passing convoy of troops.

Or, as I see an old woman kiss her fingers and then reach to touch the face of a young boy in one of the photos at the top of Heroes of the Heavenly Hundred Street, I hear those words again:

I even fought for it.

But until I arrived in Ukraine, I never really understood what it meant.