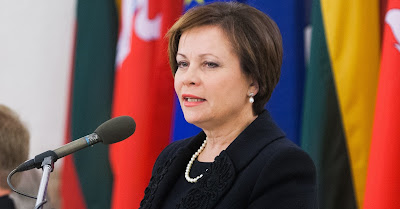 Rasa Jukneviciene, who serves as deputy chair of the national security and defense committee in the Lithuanian Parliament, said the European Union and NATO need to step up multilateral economic and military operations to weaken the Kremlin's grip over eastern Ukraine.

"The only way to help Russia be different is to help Ukraine," Jukneviciene said during an event in Washington, D.C.

Jukneviciene said Ukrainian success would deal a major blow to Russian President Vladimir Putin, who has taken advantage of corruption in Kiev and a sluggish economy to push the narrative that the country is on the brink of collapse.

Though Putin has been most active in Ukraine, the Kremlin is also orchestrating a propaganda campaign aimed at rewriting the history of Lithuania to undermine the small Baltic state's sovereignty.

Russia frequently denies its 50-year occupation of Lithuania and claims that Lithuania's freedom fighters were gangsters and fascists.

"Baltic states are used as a tool to test NATO [to see] if we would speak about possible military intervention, or to restore the influence of the former Soviet Union to keep countries like the Baltic states more pro-Russian."

Jukneviciene is in Washington for the week to discuss Russian disinformation with U.S. government officials.