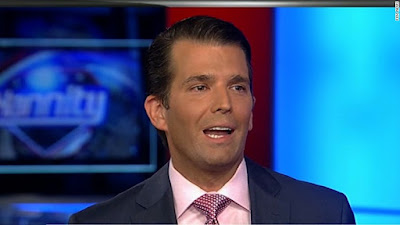 But multiple Democratic sources said that a DNC contractor, whose work included organizing political events for Ukranian-Americans, did tell DNC operatives that Ukrainian officials would be willing to deliver damaging information on Trump's campaign and, most notably, Paul Manafort, his then-campaign head who has previously advised Viktor Yanukovych, the former Ukrainian President who has close ties to Moscow.

Lauren Dillon, research director at the DNC, also denied any contact with any foreign governments, including Ukraine.

"I've been director of research at the DNC for four years and had zero contact with foreign governments," she said.

These denials look to cut against a talking point the White House and pro-Trump Republicans are using to deflect attention from Donald Trump Jr.'s June meeting with Natalia Veselnitskaya, a lawyer described to him as an emissary of the Russian government.

The meeting, which first came to light on Saturday in a report by The New York Times, has rocked the Trump White House.

"If you're looking for an example of a campaign coordinating with a foreign country or a foreign source, look no further than the DNC, who actually coordinated opposition research with the Ukrainian Embassy," White House deputy press secretary Sarah Huckabee Sanders said on Monday.

Sebastian Gorka, a Trump White House aide, told CNN on Tuesday that the DNC was "sending its people to the Ukrainian embassy to coordinate oppo attacks against our candidate."

"If you want to see collusion, it's in the DNC," Gorka said.

The story also made its way into the confirmation hearing for Trump's nominee for FBI director, Christoper Wray, who testified before the Senate judiciary committee on Wednesday.

Sen. Lindsey Graham, a South Carolina Republican, pressed Wray on the story and got the nominee to agree to look into any involvement Ukraine may have had in pitching negative information on Trump's campaign to the Democratic National Committee.

"I'd be happy to dig into it," Wray said, acknowledging that he had not previously heard of the allegations.

The DNC contractor who floated the idea of getting damaging information from the Ukranian embassy was Alexandra Chalupa, a Ukrainian-American activist and consultant for over a decade.

She also served several other Democratic clients while working for the DNC.

But a DNC official said the organization has no evidence of the Trump team's claims.

A source familiar the matter said Chalupa "informally" told at least one committee staffer last year that Ukrainian officials had become concerned about Trump's campaign and his ties to Russia and suggested having the DNC work with the Ukrainian embassy to bring some damning information to light.

The source said Chalupa was told "unless there is something public, there is nothing we can do" and that the DNC "never got anything from her" or "met with the Ukrainians."

"We never got any actual information. It didn't go beyond running by someone in a hall way and hearing rumors," the source said.

"It was hearsay in the hallway conversation, there was never any formal conversation or paper research."

Politico reported in January that Ukrainian government officials worked with at least one Democratic operative during the 2016 campaign to help Hillary Clinton and undermine Trump.

The story centers on Chalupa, who told Politico that she had a network of people in Kiev and Washington -- including Ukrainian government officials -- who would pass her information that she then wanted to pass to the DNC and Clinton campaign.

"I felt there was a Russia connection," Chalupa told Politico.

Requests for comment from Chalupa, who no longer works for the DNC, went unanswered.

Multiple Clinton campaign officials, including those who ran her opposition research operation, said Tuesday that they never received information from Chalupa.

"I ran the opposition press program for the Clinton campaign and I don't know what the hell they're talking about," said Zac Petkanas, a former Clinton staffer.

"The first time I heard about this distraction was press reports last January. There's only one campaign that colluded with a hostile foreign government: Donald Trump's."

Robby Mook, Clinton's former campaign manager, also denied that anyone from the Clinton campaign was talking to Ukrainian government officials in an effort to get opposition research on Russia.

"Our campaign wasn't," he said.

"Foreign agents weren't reaching out to us."

"This latest attempt by Trump and his allies to distract from disturbing news about their connections to Russia would be laughable if it weren't such a dark day for our country," Watson, the DNC spokeswoman, said on Tuesday.

"It's not surprising that Trump and his allies continue to resort to spreading conspiracy theories about the DNC in order to distract from news of their disturbing contacts with Russia."