July 08, 2017
LUHANSK, Ukraine -- One person is dead and five others are wounded after two explosions in LuHansk, Ukraine – a city held by pro-Russian rebels. 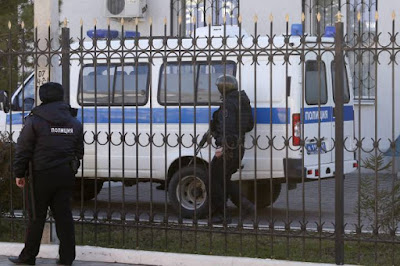 Luhansk, a city in eastern Ukraine, has been held by the rebel group of Luhansk People's Republic (LPR) since 2014. The LPR is one of what the Ukrainian government calls the "temporarily occupied territories" after pro-Russian activists seized it.

Local media are reporting there were two blasts in the city in eastern Ukraine, which is a rebel-controlled city held by the People’s Republic (LPR).

The first one was in the central square of the city.

The second blast was near the first one but more powerful, local reports said.

A spokesperson for the regional militia, Andrei Marochko, said the first blast was in the central square of the city at a food store.

The second blast went off nearby when police were investigating, according to local media.

Marochko called the blasts “terrorist bombings” and he blamed them on unspecified “Ukrainian hawks,” according to the rebel Luhansk Information Center.

He said the apparent intent was to undermine the possibility of Friday’s meeting between Donald Trump and Vladimir Putin making progress toward resolving the Ukraine conflict.

A captain of the medical service of the LPR people’s militia was killed in the attack, a spokesperson said.

More than 10,000 people have been killed in fighting between Ukrainian forces and Russia-backed separatist rebels in east Ukraine since the spring of 2014.

Luhansk has been held by the rebel group LPR since then.