Vladimir Putin To Megyn Kelly: Even Children Could Hack An Election

June 05, 2017
LONDON, England -- Vladimir Putin again denied that Russia interfered in last year's U.S. election, joking to NBC News' Megyn Kelly on Friday that even her "underage daughter" could have been behind the hacking. 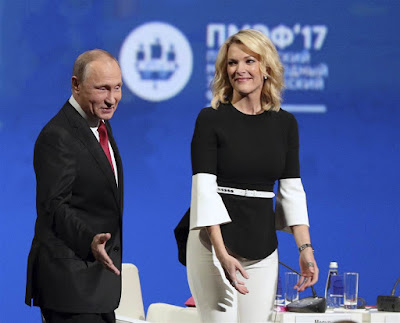 The journalist asked the Russian president about what American intelligence agencies say is evidence that he became personally involved in a covert campaign to harm Hillary Clinton and benefit Donald Trump.

"IP addresses can be invented — a child can do that! Your underage daughter could do that. That is not proof," Putin replied.

He also said that U.S. accusations about Russia were reminiscent of "anti-Semitism and blaming the Jews," describing them as "disinformation."

Putin made the comments in a panel discussion moderated by Kelly at the St. Petersburg International Economic Forum.

Later Friday, Kelly went one-on-one with Putin in a sit-down interview that aired on "Sunday Night with Megyn Kelly" this Sunday at 7 p.m. ET.

Putin dismissed the hacking allegations "idle prattle," "harmful" and issued his latest flat-out denial that Russia was behind the hacking.

"We didn't do this. Stop this!" he said. Putin blamed the allegations on "internal political bickering."

He said: "There is no specific evidence, no facts, just assumptions, allegations and conclusions based on those allegations nothing more."

Earlier at the forum on Thursday, Putin suggested for the first time that private "patriotic" hackers could be behind attacks on the world's democracies — but he still denied interfering in the U.S. election.

He asked: "If you're not intending to attack anybody, why increase your military spending?"

He added: "The U.S. demands from their allies to raise their spending and simultaneously says that NATO is not going to attack anybody."

Putin suggested that NATO was an outdated alliance.

"NATO was established as a Cold War instrument in the fight against the Soviet Union ... there is no longer any ... Soviet Union but NATO is still there. The question is, what for?" he asked.

"NATO has already been talking about transformation … into a political organization, as the kind of an organization that creates the elements of stability in the world," Putin said.

He added, however, that "so far we are seeing the way the military infrastructure is expanding and heading towards our borders."

The Russian leader suggested the alliance's continued existence could be explained because it was merely an "instrument of U.S. foreign policy."

Trump has been pressing his 27 NATO allies to up their military spending to the 2 percent of GDP recommended by the alliance — a threshold only a handful of them meet.

He has gone further than his predecessors and shocked Western foreign policy analysts by hinting that he may withhold America's decades-long protection if these targets are not met.

Putin's sky-high domestic popularity is built on his self-styled image as a man who can restore Russia to its former glory.

He sees NATO as a Western encroachment on Russia's borders.

Kelly said the interview would be "the first time he has sat down with an American journalist since the appointment of a special counsel to look into allegations of Russian interference in our election."