June 17, 2017
MOSCOW, Russia -- Vladimir Putin has referred to "the territories which now belong to Ukraine" in ominous comments during his annual phone-in. 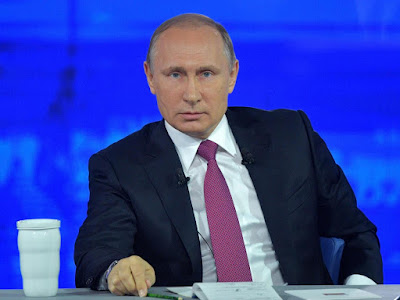 Vladimir Putin, the Russian President, used the annual question and answer session to talk to voters about key issues ahead of next year's presidential election.

The Russian President made several remarks about Ukraine, recent anti-government protests and his country's relations with the United States, during A Direct Line With Putin.

"I hope at some time this period in the life and history of Ukraine and the Ukrainian people will come to an end," ​Mr Putin said.

Mr Putin used the question and answer session to talk to voters about key issues ahead of next year's presidential election, which he is expected to contest.

He went on to say how much he values the views of Ukranians who remember the "common history" uniting Russia and Ukraine.

"We grasp it and we value it highly, believe me."

"If it wasn't for Crimea, other problems, they would have invented something else to deter Russia," he said.

During the tightly choreographed marathon TV appearance, Mr Putin gave a rare glimpse into his private life, saying he has two grandchildren whose privacy he wants to respect, and even spoke to a man whose wife had given birth moments ago.

"We have many friends in Ukraine," he said, before going on to say the Ukranian nationalists "all believed Ukraine should be independent but it should also be a federal state."

He added that "over-centralisation... would lead to domestic conflicts in Ukraine. This is what we have been witnessing. By the way, some of the defenders of the Ukrainian independence and the Ukrainian nationalism did not see Crimea as part of Ukraine."

He said construction of a bridge to connect mainland Russia with Crimea is on schedule "and even slightly ahead of it".

It is meant to be operational by the end of next year.

During the four-hour show, Mr Putin accused his opponents of "abusing" and exploiting problems in Russia rather than offering a solution.

He said that while "street protests always emerge as part of democratic procedures," they were "not being done to improve the situation in the country."

He also said Russia's campaign in Syria had allowed the military to test its state-of-the art weapons in real combat.

The experience allowed engineers to polish weapons designs and has given a "new quality" to the Russian military, he said.

He said it was "very strange" the FBI official had leaked details of conversations with the US President and compared his actions to those of Edward Snowden.

The Russian President said his country was "ready for a constructive dialogue" with the US.

Mr Putin said Moscow and Washington could cooperate in efforts to prevent the proliferation of mass destruction weapons, including the North Korean nuclear and missile problem.

He said the two countries could also cooperate in dealing with global poverty and efforts to prevent climate change.

"As far as the flashpoints are concerned... there are positive examples of our cooperation. Syrian problem, Mid-Eastern problem on the whole... There are other flashpoints and we are very hopeful for the United States' constructive role in the resolution of the Ukrainian crisis... We are ready for a constructive dialogue."