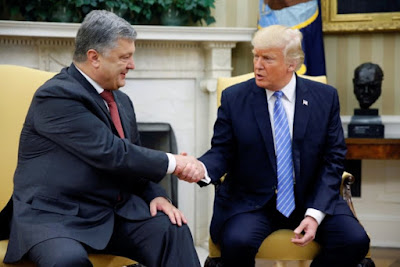 Ukraine is concerned about what the Trump administration's efforts to improve relations with Russia might mean for its own relationship with Washington.

The White House didn't exactly roll out the red carpet for the Ukrainian leader — he dropped in to the Oval Office to see Trump following a meeting with Vice President Pence.

Ahead of the meeting, Poroshenko had stressed on his Twitter account that "it is important that President of Ukraine will meet with President of the US earlier than Putin."

Trump and Russian President Vladimir Putin are expected to meet in Germany next month at the G-20 Summit.

During a brief joint appearance, both Poroshenko and Trump described meeting each other as a "great honor," and Trump said Ukraine is "a place that we have all been very much involved in."

Poroshenko had earlier touted his meeting schedule with U.S. officials and stressed that "there has never been such a substantial visit."

After talking with Trump, he said he was "satisfied with the results of the negotiations," and that they discussed military and technical cooperation, without elaborating.

They are "part of an ongoing effort to hold those responsible for violations of Ukraine's sovereignty and territorial integrity accountable for their actions," the Treasury said.

"These designations will maintain pressure on Russia to work toward a diplomatic solution," Treasury Secretary Steven T. Mnuchin said in the statement.

"This administration is committed to a diplomatic process that guarantees Ukrainian sovereignty, and there should be no sanctions relief until Russia meets its obligations under the Minsk agreements."

U.S. Secretary of State Rex Tillerson recently raised questions about whether the U.S. is fully behind the Minsk agreements, which are intended to end the fighting in eastern Ukraine.

Tillerson stated at a recent hearing in Congress that there may be other diplomatic options:

"So my caution is I wouldn't want to have ourselves handcuffed to Minsk if it turns out the parties decide to settle this through different agreement."

Steven Pifer, a former U.S. ambassador to Ukraine, stressed in an interview with NPR that Minsk is, for now, the only deal on the table.

And in his view, "if the Russians wanted the fighting to stop, they could make most of it stop. That hasn't happened in the two years since Minsk."

He says he sees the new sanctions as a "scene-setter" for the Poroshenko visit.

But he also sees them as a message to Congress, where lawmakers are trying to ramp up pressure and sanctions on Russia while the White House seeks more flexibility.