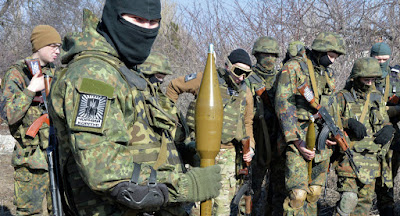 It’s still not too late for President Poroshenko to reassert control over the rule of law and end the far right’s growing sense of impunity.

These groups are not shy about using violence to achieve their goals, which are certainly at odds with the tolerant western-oriented democracy Kiev ostensibly seeks to become.

The recent brutal stabbing of a left-wing anti-war activist named Stas Serhiyenko illustrates the threat posed by these extremists.

Serhiyenko and his fellow activists believe the perpetrators belonged to the neo-Nazi group C14 (whose name comes from a 14-word phrase used by white supremacists).

The attack took place on the anniversary of Hitler’s birthday, and C14’s leader published a statement that celebrated Serhiyenko’s stabbing immediately afterward.

The attack on Serhiyenko is just the tip of the iceberg.

More recently C14 beat up a socialist politician while other ultranationalist thugs stormed the Lviv and Kiev City Councils.

According to a study from activist organisation Institute Respublica, the problem is not only the frequency of far-right violence, but the fact that perpetrators enjoy widespread impunity.

It’s not hard to understand why Kiev seems reluctant to confront these violent groups.

For one thing, far-right paramilitary groups played an important role early in the war against Russian-supported separatists.

Kiev also fears these violent groups could turn on the government itself — something they’ve done before and continue to threaten to do.

To be clear, Russian propaganda about Ukraine being overrun by Nazis or fascists is false.

Far-right parties such as Svoboda or Right Sector draw little support from Ukrainians.

Even so, the threat cannot be dismissed out of hand.

If authorities don’t end the far right’s impunity, it risks further emboldening them, argues Krasimir Yankov, a researcher with Amnesty International in Kiev.

Indeed, the brazen willingness of Vita Zaverukha — a renowned neo-Nazi out on bail and under house arrest after killing two police officers — to post pictures of herself after storming a popular Kiev restaurant with 50 other nationalists demonstrates the far right’s confidence in their immunity from government prosecution.

It’s not too late for the government to take steps to reassert control over the rule of law.

First, authorities should enact a “zero-tolerance” policy on far-right violence.

The police need to start enforcing this law.

Most importantly, the government must also break any connections between law enforcement agencies and far-right organisations.

The clearest example of this problem lies in the Ministry of Internal Affairs, which is headed by Arsen Avakov.

Avakov has a long-standing relationship with the Azov Battalion, a paramilitary group that uses the SS symbol (a Nazi force symbol) as its insignia and which, with several others, was integrated into the army or National Guard at the beginning of the war in the East.

Critics have accused Avakov of using members of the group to threaten an opposition media outlet.

As at least one commentator has pointed out, using the National Guard to combat ultranationalist violence is likely to prove difficult if far-right groups have become part of the Guard itself.

Avakov’s Deputy Minister Vadym Troyan was a member of the neo-Nazi Patriot of Ukraine (PU) paramilitary organisation, while current Ministry of Interior official Ilya Kiva — a former member of the far-right Right Sector party whose Instagram feed is populated with images of former Italian fascist leader Benito Mussolini — has given extremist threats.

And Avakov himself used the PU to promote his business and political interests while serving as a governor in eastern Ukraine, and as interior minister formed and armed the extremist Azov battalion led by Andriy Biletsky, a man nicknamed the “White Chief” who called for a crusade against “Semite-led sub-humanity.”

Such officials have no place in a government based on the rule of law; they should go.

More broadly, the government should also make sure that every police officer receives human rights training focused on improving the policing and prosecution of hate crimes.

Those demonstrating signs of extremist ties or sympathies should be excluded.

In one notorious incident, media captured images of swastika-tattooed thugs — who police claimed were only job applicants wanting to have “fun” — giving the Nazi salute in a police building in Kiev.

This cannot be allowed to go on, and it’s just as important for Ukrainian democracy to cleanse extremists from law enforcement as it is to remove corrupt officials from former president Viktor Yanukovych’s regime under Ukraine’s “lustration” policy.

It’s still not too late for Poroshenko to end the far right’s growing sense of impunity.

But he must act now.