June 26, 2017
KIEV, Ukraine -- With Washington's blessing, Ukraine is going on the offensive against a Baltic Sea pipeline it deems a death knell to state controlled Naftogaz. 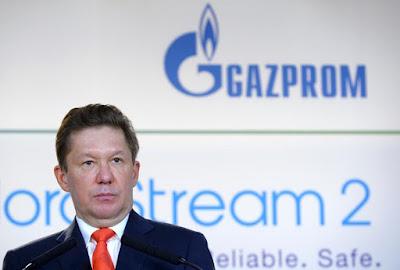 Gazprom CEO Alexei Miller. His company faces the possibility of extra-territorial sanctions by Washington. Ukraine is happy. Europe is not.

Naftogaz is one of the most important companies in the country, and the gateway between Russian gas fields and the European market.

This is the ultimate fight.

Only this time, it pits Ukraine and the U.S. on one side with the Europeans and Russians -- oddly enough -- on the other.

Some history is warranted here.

Naftogaz and Gazprom have been going through a bitter divorce with the Europeans as mediators since at least 2014.

It's one arbitration hearing after another in a Stockholm court over contract disputes involving the two, with Gazprom the defendant.

Gazprom is run by the Russian government.

Gazprom supply contracts have been a bone of contention for years.

The courts will rule on that one, lord knows when.

But as a result of the crisis between the two countries, Gazprom looked to Turkey and the Europeans to build alternative pipelines.

The Turks are building Turkish Stream.

The Germans, French, Austrians and the Brits are looking to build Nord Stream II, a pipeline that would sit right beside an existing one.

As it is not a new route, Ukraine calls it a political move to squeeze Naftogaz of its ability to make money delivering Russian gas to Europe.

Anti-Russia Senators, most of them Republican Never Trumpers, are turning the screws on Russian oil and gas firms.

They have three hopes here: punish Russia for supporting anti-government forces in Ukraine; ban Trump from his constitutional duties of being able to call off the sanctions regime and...help U.S. natural gas drillers and potential exporters.

This has the Germans, in particular, in an uproar.

On June 14, the Senate passed a bill by a margin of 97 to 2 in favor of extra-territorial sanctions on Russian oil and gas.

That means the Senate wants to give the President powers to punish companies doing certain types of business with sanctioned Russian firms outside of Russia instead of only those inside of Russia.

Five days later, Naftogaz gave a hint to its lobbying efforts in the E.U. against Nord Stream.

They said in a note that the European Commission "should use its mandate as a guardian of the interests of the European consumers and insist on the application of the Third Energy Package to the Nord Stream II project."

The goal was not to punish Russia -- which accounts for 30% of Europe's natural gas --but to avoid local energy monopolies in the European Union.

The idea was to break up the power generators from the transmission and delivery firms, of which Gazprom sits squarely on the Nord Stream line.

Although it partners with Engie of France, Shell Oil and Whiteshall of Germany to name a few, the gas is all Russian.

In Ukraine, the gas is also primarily Russian, but the transit lines belong to Naftogaz and Ukraine.

Ukraine is the traditional route into Europe for Russian natural gas.

There are four major pipeline arteries going through Ukraine.

They connect mainly to old Warsaw Pact nations like Poland and Bulgaria.

"This legal framework shall ensure proper regulatory and anti-trust safeguards against market manipulations and abuse of dominance," Naftogaz said in a statement in a nod to Russia's dominance as sole supplier via those pipelines.

Naftogaz is getting skillful at tugging at the heart strings of the E.U., which already has a political bias against Russia.

The congress's anti-Russia stance is counter to president Donald Trump's, but Trump has been beat up so severely on Russia that defending any sort of detente with the Kremlin seems futile.

For all its talk about belonging in the European community, Ukraine has chosen Uncle Sam instead.

When it comes to allies, Ukraine still finds itself climbing a mudslide.

"The Nord Stream II project undermines the solidarity in the E.U.," the company said in a statement yesterday as if that's Naftogaz's real concern.

The project was first rejected by Poland.

That's because they spent millions on a new LNG terminal and Nord Stream II was a surprising and cheaper alternative.

Who would have thought that Russia would come up with an idea to lay pipe right beside existing pipe?

Poland anti-trust legislators blocked Shell and others from participating in the deal out of concern they would have greater market control over Poland gas supply.

Sadly, Poland has gone against the prevailing wins of the E.U. establishment.

The government is against Germany's preferred open borders policy to share the migrant burden across member states.

It is unclear if Poland has any power to stop Nord Stream on its own.

Only Washington sanctions can.

Either that, or European energy companies have a change of heart and want Ukraine to make money instead of them.

Ukraine is doing what it can to get Europe's attention.

For them, Nord Stream II is a serious threat to the existing Ukraine routes, but they are forced to focus on what it means for Europe, not for Ukraine's finances.

"It goes against the principle of efficient use of infrastructure, and leads to concentration of delivery routes under Russia's control, without providing access to any new sources or suppliers of energy," Naftogaz said.

To appeal to environmental rule makers, the company tossed out the idea that the project inflicts "unjustified environmental damage" to the Baltic Sea.

The sanctions against Nord Stream II are dependent on the House version of the bill, and President Trump's Treasury Department agreeing to enforce them in the first place.

Still, this is a whole new threat that either forces major European energy firms to stand down on the deal -- a project they've committed capital to already --or add insurance costs in case Treasury decides to fine them.

"Some EU partners in the project may decide not to go ahead because of a threat of sanctions," says Ariel Cohen, a senior fellow at The Atlantic Council.

"That's true even if the U.S. at this point decides not to use that option."

The negative reaction to the Senate bill didn't come from Shell or the Brits.

It came from Germany and Austria's government.

German firms Wintershall and Uniper and their Austrian partners OMV are the biggest financiers of the Baltic Sea pipeline.

Judging by all the exclamation marks in their statement, they are unhappy with U.S. Senators.