June 30, 2017
KIEV, Ukraine -- Three years into the war in Ukraine, while deaths and injuries from the conflict with Russian-supported separatists have waxed, international attention and aid to the displaced have waned. 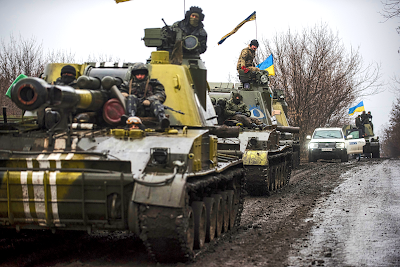 The country now has one of the largest groups of internally displaced people in the world.

Yet, as the fighting enters its fourth year, few seem to remember what started the trouble, or that it’s an ongoing campaign.

Mission Eurasia President Sergey Rakhuba noted, “The number of refugees, or the internally displaced people, is not decreasing. While I was there, the shooting was still going in the eastern parts of Ukraine.”

Families are in despair there and, unfortunately, he said, Ukraine is not getting much help.

“They have no right to go and flee to another country. Because this war is not recognized as a civil war, they cannot go outside of Ukraine and look for refuge in any of the European countries like the refugees from Syria.”

The back story: protests in March 2014 ended in the resignation of the president, Viktor Yanukovych.

However, Russia then annexed Crimea and backed rebels in Donbass.

Ukraine, Russia, and the Organization for Security and Cooperation in Europe signed an agreement to end the fighting in September 2014.

Sadly, this deal and many other peace efforts have failed.

For example, Rakhuba said, “We see that the European Union posted new sanctions (and the United States); it does not work for Russia. They continue pushing their agenda, supporting the separatists so that they are still fighting.”

So far, over 10,000 people have been killed, and more than 3.1 million suffering people are completely dependent on humanitarian aid to survive.

There are over two million Ukrainians who have been displaced within the country, trapped in bombed-out villages without natural gas, hot water, food, or basic necessities.

Yet, the initial flood of aid has dried up.

Rakhuba called it the ‘Forgotten War’.

“There is still so much need there in Ukraine among the refugee community. I appreciate you (MNN) bringing this to the surface again and having your listeners learn more and possibly get involved with Mission Eurasia when we continue providing food, providing Scripture, and providing lots of counseling.”

One way Mission Eurasia is responding is through their “I Care” Refugee Assistance Program.

It provides for the urgent needs of refugees and other displaced people in Ukraine.

“A group of Mission Eurasia volunteer counselors and leaders traveled to that area. They’re organizing a lot of training in the next several days working with missionaries that are there in the area, working with the families of the pastors and other church leaders, organizing them into training.”

The training, he explained, “…helps them to be the ‘healing entities’, as we would call them, while the war continues and lots of families need help….”

By delivering Bibles and Scripture resources, food packs, wheelchairs, clothing, and other much-needed relief aid, their Next Generation Christian leaders and other ministry partners are seeking to be the hands and feet of Jesus to those in need in Ukraine.

When bombs started falling in their village in Ukraine, 8-year-old Inessa and her family hid along with 26 others from their church, in an underground bunker for three long, frightening days.

Before they knew it, they ran out of food and water.

Their pastor risked his life to climb out of the safety of the bunker and find his car so they could escape the bombing.

He then spent many dangerous hours transporting everyone to another village several hours away.

There they found an abandoned school and turned it into an impromptu center for IDPs.

Displaced and on the run from the fighting, Inessa’s family couldn’t return home.

Their lives were shattered. Inessa became scared of everything.

She started having nightmares.

Because YOU care, our food partner Mission Eurasia was able to give the family MannaPack™ Rice so they could survive.

Soon, Inessa’s parents were able to move to a different village and find work.

They don’t make much money, but thanks to the MannaPack meals you’re sending, they don’t have to worry about where their next meal is coming from.

Instead they can focus on sending Inessa and her sister to school.

The family is finding hope again, even in the midst of the challenges they are facing.

Inessa is healing, too.

She stopped having as many nightmares.

She started smiling again, and she’s making many new friends at school.

“One day, peace will come back to Ukraine and kids won’t have to hide in dark cellars anymore,” she said.

Aside from supporting programs that resource the Body of Christ to respond, Rakhuba urged prayer for the leadership in the Church in Ukraine.

“[The] Church is playing such an important role in this situation. It was recently called the ‘Most Trusted Entity in Society’.  The Church is actually responding in the most active way.”

Then, “Pray for these families, that they can have hope in the midst of despair, and that hope is in Jesus. Pray for School Without Walls students and graduates of Mission Eurasia. They’re volunteering now and mobilizing all possible resources that they can bring to the places of need.”

Finally, please pray wisdom for the leadership in Russia.