June 17, 2017
LONDON, England -- British authorities are examining whether Ukraine's former tax chief, a Ukrainian citizen who may also hold a British passport, committed crimes for which he could be prosecuted in the United Kingdom after a court in Ukraine ignored evidence they provided, according to the British Embassy in Kiev. 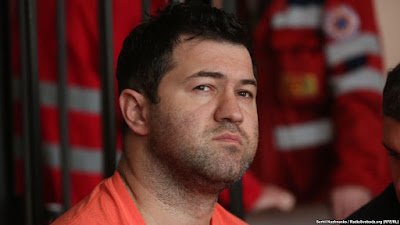 Roman Nasirov appears in court in Kiev in March.

Roman Nasirov, the former chief of Ukraine's Fiscal Service and an ally of President Petro Poroshenko, was arrested in Ukraine on corruption charges in March, a move that was heralded as a landmark win for anticorruption officials in the country's fight against entrenched graft.

But in the ensuing trial, prosecutors have struggled to have all evidence, including that provided by Britain, heard by the Kiev court.

That prompted the British Embassy to take the extraordinary step of announcing on June 16 that it will consider other possible prosecutorial options against the tax chief.

"We are deeply concerned about the recent decision in Kiev's Solomiansky court, where evidence provided by the UK in relation to the case against Roman Nasirov was ruled inadmissible and disregarded," the British Embassy in Kiev said in a statement published on its social-media accounts.

"The U.K. authorities will now review the facts and consider if criminal offenses have been committed by a British citizen which may be tried in the U.K."

Ukrainian prosecutors accuse Nasirov, who was removed from his post on March 3, of defrauding the Ukrainian state of 2 billion hryvnyas (about $77 million) to the benefit of fugitive Ukrainian lawmaker Oleksandr Onyshchenko.

Nasirov has called the case against him "politically motivated" and said he will fight to prove his innocence.

His arrest marked the first detention of such a high-ranking current or former Ukrainian official since the country's pro-Russian president, Viktor Yanukovych, was overthrown in 2014, and a pro-Western government came to power.