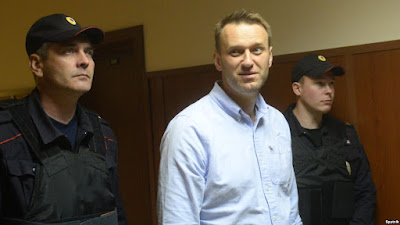 Russian opposition leader Aleksei Navalny arrives for a hearing of his appeal at a court in Moscow on June 16.

Vladislav Zdolnikov, an FBK IT consultant, and activist Aleksandr Brusentsev crossed into Ukraine on June 15.

The activists told the BBC that Roskomnadzor suspected them of illegally blocking access to some websites by using a vulnerability of the government's system for blocking banned websites.

However, the activists told the BBC that they had not asked for asylum and were not planning to do so.

They said they planned to stay in Ukraine temporarily until the situation around Roskomnadzor's allegations was cleared up.

Navalny and at least 1,500 of demonstrators were detained on June 12 in Moscow and other cities across Russia for participating in a wave of unauthorized anticorruption protests.

Navalny was jailed for 30 days, which an appeals court reduced to 25 days on June 16.