Trump’s ‘Pit Bull’, With Biz Ties To Ukrainian Emigres, Is Back In Spotlight

June 03, 2017
WASHINGTON, DC -- Michael Cohen, Donald Trump’s “pit bull” personal attorney, is the latest associate of the President’s with ties to a former Soviet republic to emerge as a person congressional investigators want to hear from in their probes into Russian interference in the U.S. election. 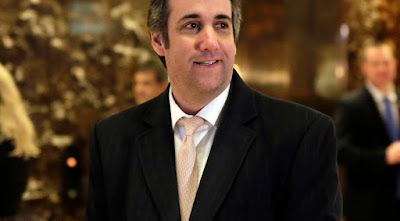 The pugnacious Manhattan lawyer’s name has cropped up in various subplots involving the Trump administration and Russian interests, from a largely unverified dossier compiled by a former British spy to an effort to get a secret Ukraine “peace plan” that would end U.S. sanctions against Russia on the desk of Trump’s first national security advisor.

He’s also reportedly a person of interest in the sprawling federal investigation into Russian election meddling.

Like other Trump campaign associates who’ve been asked to provide Congress with documents, Cohen has business ties to the former Soviet Union.

Ukraine is a country that has figured heavily both in Cohen’s professional and personal life, as he and his brother, Bryan, are each married to Ukrainian immigrants.

Cohen and his in-laws own multiple units in Trump-branded properties, and he maintains business relationships with other Ukrainian immigrants (there’s no evidence that any of his business partners are connected to efforts to interfere in the U.S. election).

Cohen did not respond to those questions by press time.

Here’s an overview of Cohen’s web of business ties and other dealings:

When the New York Times first reported in February that Cohen hand-delivered to then-national security adviser Michael Flynn a proposal to end the conflict between Russia and Ukraine and lift U.S. sanctions against the former, Cohen confirmed the story.

“Who doesn’t want to help bring about peace?” Cohen said to the newspaper, justifying his delivery of a plan drawn up by Andrii Artemenko, an eccentric member of Ukraine’s parliament.

The effort was coordinated by Cohen, Artemenko and Felix Sater, a mafia-linked Trump associate who helped the Trump Organization identify opportunities in Russia in the mid-2000s and plead guilty to his involvement in a stock manipulation scheme.

Cohen dramatically changed the account of his role in the peace plan in three subsequent interviews.

First he “emphatically” denied to the Washington Post discussing the plan or “delivering any documents,” saying he simply told Artemenko that he could mail his proposal to Flynn.

In a subsequent conversation with Business Insider he denied “even knowing what the plan is,” before finally telling NBC News that even if he indeed brought the proposal to the White House, there would be nothing “wrong with that.”

The story took a bizarre twist in early March, when Artemenko announced the death of Alex Oronov, Bryan Cohen’s father-in-law, via Facebook.

His rambling post blamed media pressure following the New York Times report for the death of Oronov, who he said helped broker his meeting with Cohen.

“And he organized all kinds of stuff, including an introduction and a meeting for me with Michael Cohen.”

An ethanol business that’s all in the family

An art dealer-turned-agricultural sector magnate, Oronov teamed up with the brothers Cohen on several companies tied to the ethanol industry.

The trio incorporated International Ethanol of Ukraine, Ltd. in Delaware 2006, and in 2007 followed up with Ukrethanol LLC, a company that exported farm equipment from the United States to Ukraine on behalf of Oronov’s agribusiness company, Grain Alliance.

The ethanol gig brought Cohen to Ukraine in the mid-2000s as Oronov and fellow investors looked for an ideal site for an ethanol processing plant, according to the Kiev Post.

Evheniy Radovenyuk, current CFO of Grain Alliance who was involved in planning for the plant, told the Ukrainian newspaper that Cohen “participated in discussions” but had “no financial involvement.”

Cohen recently told Yahoo News that he went to Ukraine twice in “either 2003 or 2004” because his “brother’s father-in-law lives in Kiev.”

“That’s the extent of it,” Cohen told Yahoo.

“I’ve never been to Russia. I have no Russian Kremlin connections.”

Riding with taxi magnates Cohen has a lucrative side venture in the taxi business, teaming up separately with two Ukrainian-born New York City cab kingpins known for their run-ins with the law.

His first partner, Simon Garber, has a long rap sheet that included charges for filing a false police report, trespassing and driving while intoxicated, according to the New York Observer.

Then there’s Evgeny “Gene” Freidman, also known as “The Taxi King,” who’s been accused of sexual harassment and owed some $13 million in taxes from his cab business, per the New York Daily News.

It’s unclear exactly how Cohen entered the taxi business and first linked up with Garber.

But he’s told the Wall Street Journal that Garber was a legal client of his and that they were partners in the taxi business until the early 2000s, at which point he said he sold Garber his stake in their company, relinquishing control of the operations and fleet.

After that Garber continued to manage some of the more than 15 taxi medallion companies owned by Cohen, which had playful names like Smoochie Cab Corp and Lady Laura Hacking Corp.

The arrangement devolved into a legal dispute in 2012 when Garber filed a claim with the American Arbitration Association, accusing Cohen, who’d cited neglected insurance payments from a number of accidents involving SLSJET drivers in abruptly cutting ties with the company, of breaching his contract.

Cohen, along with his wife, Laura, and his mother-in-law, Ania Shusterman, went to New York State Supreme Court to try to stay the proceedings, saying the original contract they agreed to with Garber contained no arbitration agreement.

In the claim, Garber charged that Cohen “unilaterally” drafted a second contract that contained arbitration language.

He further alleged that Cohen went to his home while he was “travelling on business” and “manipulated” Garber’s wife into signing that second contract.

A judge ultimately ruled against the Cohens, and the claim went into private arbitration.

It’s unclear how the dispute was resolved.

Cohen had been pulling in more than $1 million per year from the medallions Garber managed, arbitration documents showed.

After that messy business breakup, Freidman assumed control of those 15 medallion companies on Cohen’s behalf.

In a February phone conversation with TPM, a nervous-sounding Freidman confirmed that he’d been managing medallions for Cohen for more than 16 years, including some in Chicago.

While emphasizing that he didn’t want to comment on such a “hot issue,” he heaped praise on his longtime friend, saying the two “talk daily sometimes.”

“I keep up a relationship with him,” Freidman said before rushing off the phone.

“I help him out as much as I can. I also have a business relationship but we’re friends, you know. We have dinner with his wife.”

In 2003, Cohen teamed up with Ukrainian partners Leonid Tatarchuk and Arkady Vaygensberg to launch Atlantic Casino, a gambling boat company based in south Florida.

Cohen was a shareholder and director of two companies that controlled the casino boat, MLA Cruises and Majesty Enterprises, according to state business records.

Cohen put up $1.5 million for his 30 percent stake in the casino boat, which ran successfully for months before suddenly going bust, leaving a long trail of unpaid vendors and marina fees in its wake.

The casino boat project was ultimately subject to at least 25 Florida lawsuits, according to a thorough investigation by BuzzFeed News, although Cohen himself was not listed as a defendant in any of those suits.

Those owed money received much less than they were due, while some judgments against the company went unheeded entirely, according to the investigation.

Cohen told BuzzFeed that, as a “silent partner,” he was unaware of some of the lawsuits and lamented the $1.5 million loss on a botched investment.