June 29, 2017
WASHINGTON, DC -- Donald Trump’s former campaign chairman, Paul Manafort, has registered with the US justice department as a foreign agent for political consulting work he did for a Ukrainian political party, acknowledging that he coached party members on how to interact with US government officials. 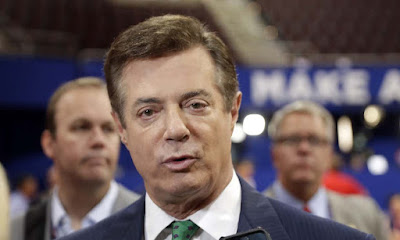 In a filing on Tuesday, Manafort said his firm, DMP International, received more than $17m (£13.2m) from the Party of Regions, the former pro-Russian ruling party in Ukraine, for consulting work from 2012 to 2014.

Manafort is the second member of the Trump campaign to register as a foreign agent.

In March, former national security adviser Michael Flynn registered with the justice department for work his consulting firm performed for a Turkish businessman that he said could have aided the Turkish government.

Both registrations came after the work had been completed.

Manafort helmed Trump’s campaign for about five months until August.

He resigned from the campaign immediately after the Associated Press reported on his firm’s covert Washington lobbying operation on behalf of Ukraine’s ruling political party.

He is one of several people linked to the Trump campaign who are under scrutiny by a special counsel and congressional committees investigating Russian meddling in the 2016 campaign and potential coordination with Trump associates.

Manafort has denied any coordination with Russia and has said his work in Ukraine was not related to the campaign.

The Washington Post first reported Manafort’s registration and posted a copy of his filing online.

The filing does not bear the date and timestamps showing that it has been formally received by the justice department’s Foreign Agents Registration Act unit.

But Manafort’s spokesman, Jason Maloni, confirmed to several news outlets that Manafort had gone through with the registration.

Maloni did not respond to phone calls or emails seeking comment.

His registration came more than two months after Maloni said that Manafort would be registering under the Foreign Agents Registration Act.

Maloni later backed off that statement, saying in late April that Manafort was still considering his options after receiving guidance from the justice department.

Under federal law, people who represent foreign political interests and seek to influence US public opinion and policy are required to register with the justice department before they perform any work.

Manafort’s registration comes more than three years after he completed his work.

Instead, as in Manafort’s case, they often work with lobbyists to get in compliance.

In addition to Manafort, his deputy, Rick Gates, also registered for the Ukrainian political work.

He could not be reached for comment on Tuesday evening.

In the filing, Manafort said that his company’s work was mostly focused on domestic Ukrainian politics as part of its work for the Party of Regions, which was led at the time by the former Ukrainian president Viktor Yanukovych.

The filing repeatedly states that Manafort’s firm worked “to advance the goal of greater political and economic integration between Ukraine and the west”.

Manafort’s firm also acknowledged that it had some involvement with a Brussels-based nonprofit organisation called the European Centre for Modern Ukraine, saying that it provided “advice” to the entity.

Last August, Associated Press reported that emails showed Manafort’s firm and Gates directed the efforts of Washington lobbying firms that were working on behalf of the centre.

The emails show Gates directing lobbyists from Washington firm Mercury LLC to set up meetings between a top Ukrainian official and senators and congressmen on influential committees involving Ukrainian interests.

Gates also had the firms gather information in the US on a rival lobbying operation and directed efforts to undercut sympathy for Yulia Tymoshenko, an imprisoned rival of Yanukovych.

Both of the lobbying firms involved in the work, Mercury and the Podesta Group, have since registered with the justice department as foreign agents.