June 05, 2017
PAGAK, South Sudan -- In what has been described as a “controversial move,” the South Sudanese main rebel movement (SPLM/A-IO) under the leadership of Dr. Riek Machar has criticized some European countries, saying, “Some first world nations with third world mentality have been supplying Juba’s genocidal regime with deadly weapons.” 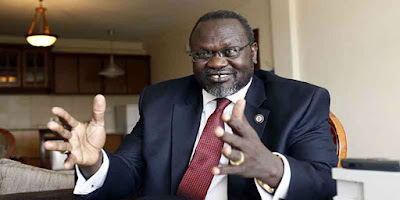 The SSNA is aware that “M7” is an assertive portrayal of the current Ugandan President Yoweri Kaguta Museveni when he was a rebel leader.

The accusation comes months after the United Nations and some international arms control groups exposed Ukraine as one of the main suppliers of weapons and ammunition to South Sudanese government.

Documents leaked to the South Sudan News Agency by a United Nations diplomatic source revealed that UN and some Westerns countries were fully aware of Uganda’s involvement in the scheme.

The source alleged that Former US President Barack Obama refused to act, allowing Kampala to “fly freely over Washington.”

“When we come to South Sudan civil war, the West under Obama was technically a sworn supporter of Museveni. They accept anything Museveni tells them,” one legal analyst told the South Sudan News Agency.

The documents also show that a central European country fighter jet pilot who has been identified as “Tibor Czingali,” deliberately bombs the armed opposition outposts.

Czingali is believed to be operating in the northern Ugandan city of Gulu, according to the documents.

James Moises, a Former Ugandan intelligence officer who has been widely credited for exposing Kampala-juba’s secrets dismissed the news as “too old,” suggesting that the world should wait for what he described as “the mother of all secrets.”

“The European and USA leaders love Museveni. They love him too much. But they have no idea about the fact that Uganda is run by a President who is the ring leader of all East African dictators,” Moises declared.

“I am tired of this old news, they are too old. Just wait for the mother of all secrets about South Sudan civil war,” he said.

Last month, Moises described the West as a Uganda’s client willing to accept anything Museveni tells them about South Sudan’s armed conflict.

Rebel military Major General Khor calls on the African Union and the United Nations to scrutinize what he described as “foreign anti-Nuer activists who gladly accept bribes from Juba to look the other way.”