Russians Insist On New Pipeline To Bypass Ukraine, And Europeans Fine With It 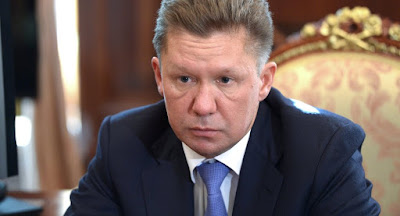 "If this Nord Stream 2 pipeline is built, it is bad for Ukraine. Bad for Naftogaz. Russia will bypass us in the future if this gets built," says Andriy Kobolyev, CEO of Naftogaz, a company that gets a chunk of its revenue shipping Russian gas into Europe.

The European Commission received a mandate on Sunday to go ahead and negotiate with Russia on the construction of the so-called Nord Stream 2 pipeline through the Baltic Sea.

There already is a Nord Stream 1 pipeline.

This one will be laid right beside it.

The source of that gas, mainly Russian state-owned gas behemoth Gazprom, says that this is a way for Europe to secure supply of natural gas when needed.

But Ukraine and gas industry executives like Kobolyev believe that Russia is using that pipeline, and another one it is building with Turkey's BOTAS Petroleum, to limit its dependence on Ukraine as a gas transit route into southern Europe.

Some see it as a way for Russia to punish Ukraine for leaning towards Europe and away from Russia.

"The Commission has approved the mandate, and today we have to submit it to the participating countries," said the European Commission vice president and the bureaucrat in charge of energy affairs, Maroš Šefčovič.

He said the Commission will likely revisit the pipeline plans in September.

Russian Energy Minister Alexander Novak told Itar-Tass news agency yesterday that he has not seen the document yet on which the Commission will base their decisions.

"Our position is that this is a commercial project between the private sector," he said.

Ukraine and Russia have been at almost at war since 2014 when a pro-Russian president named Viktor Yanukovych opted out of a European trade accord in favor of cheaper Russian natural gas.

When it became clear that Vladimir Putin advised Yanukovych away from the European deal, hundreds of thousands took to the streets in protest.

Yanukovych was removed from office.

The Euromaidan revolution, one of many revolts in Ukraine since independence, ultimately led Russia to annex Crimea following a vote by locals there to secede from Kiev, a vote Europe and the U.S. believe was also part of consulted advice from Moscow.

Both Washington and Brussels have sanctioned Russian energy and finance companies for its support of separatists in eastern Ukraine, a region Russia believes is part of its family.

This is one family dispute with international repercussions.

Russia feels the West is meddling in its household.

Ukraine and the West think otherwise.

It's a losing battle, and has been one since it began three and a half years ago.

European sanctions do not include energy companies, or at the very least, does not ban the construction of pipelines into Europe.

Construction is scheduled to start in 2019.

The pipeline will connect Russia to Germany via the Baltic Sea.

Capital costs are estimated at around 10 billion euros ($11.2 billion).

Gazprom said on June 6 that it reached a financing deal with project partners for a 6.65 billion euros ($7.45 billion) bridge loan.

The loan is supposed to fund up to 70% of the project.

Angela Merkel has been a supporter of Ukraine's new president, Petro Poroshenko, having met with him on numerous occasions to discuss the Russia peace process and financial aid.

Gazprom's partners in this new pipeline include Engie of France, OMV of Austria, Shell and Germany's Uniper and Wintershall.