Russia Calls US Statement On Eastern Ukraine 'Inappropriate And Incorrect' 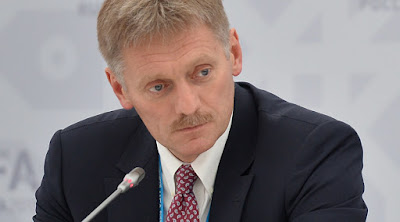 "We have repeatedly said Russia is not present on the territory of Donbass," Kremlin spokesman Dmitry Peskov told reporters, referring to the region in eastern Ukraine that is under pro-Russian separatist control.

"This is why we consider such statements inappropriate and incorrect."

A White House spokesman said Tuesday the sanctions would not be lifted until Russia pulled out of eastern Ukraine, according to the news service.

While President Trump met with Ukrainian President Petro Poroshenko on Tuesday, the Treasury Department slapped sanctions on both separatists in rebel-held areas in eastern Ukraine as well as on more Russian businesses and individuals.

The Treasury Department said in a statement that these measures “are consistent with the U.S. commitment to seek a diplomatic resolution to the crisis in Ukraine.”

These sanctions “will remain in place until Russia fully honors its obligations under the Minsk Agreements” to withdraw its forces from eastern Ukraine.

The statement also said sanctions on Russia for annexing Crimea from Ukraine in 2014 "will not be lifted until Russia ends its occupation of the peninsula.”

After Trump's meeting with Poroshenko, the White House issued a statement saying they talked about "support for the peaceful resolution to the conflict in eastern Ukraine and President Poroshenko's reform agenda and anti-corruption efforts."

Poroshenko reportedly said Trump was "one of the most reliable supporters" and "strategic partners" for Ukraine.

Trump's time in office has been surrounded by a cloud of controversy as to whether his campaign team colluded with Russia during the 2016 presidential election.