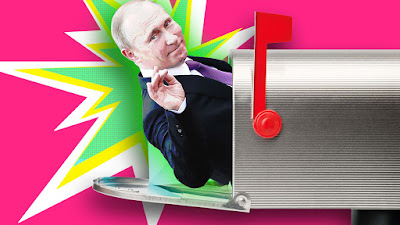 The West assumed they were Russian soldiers, but could they be sure?

Putin claimed these obscured troops were pro-Russian local defense forces, indigenous to the Ukraine but fans of the Kremlin.

But Mike Mariani explained in his recent expose how “the Kremlin carefully orchestrated an elaborate political spectacle to create the appearance of strong support for the annexation.

This spectacle is known in Russian as dramaturgia, or theater craft.”

Only a few days later, these insurgents laid the groundwork for the Russian invasion and seizure of Crimea.

The chaos created by “little green men” delayed Western responses to a surprise Russian invasion providing the Kremlin the upper hand militarily and creating what appeared to be legitimacy to the March 2014 Crimean referendum.

Today, Vladimir Putin, during an interview in St. Petersburg, changed his previous denials admitting Russians might have meddled in the U.S. election in 2016.

Similar to obfuscation in Crimea, Putin said “patriotically minded” Russians may have conducted the cyber attacks.

Hackers, he contended, “are like artists” who choose their targets depending on how they feel “when they wake up in the morning.”

He added that Russian hackers “fight against those who say bad things about Russia.”

This response reiterates a Russian pattern, tacit omission of Russian involvement with “plausible deniability” with regards to Kremlin responsibility.

Whether it’s on the ground in Crimea or online in social media, Russia’s dramaturgia seeks to mask overt government actions as grassroots nationalism.

In both cyberhacking and cyberinfluence, the Kremlin’s layering of proxies and agents mask Russia’s responsibility, confuse fact and fiction, and frustrate Western efforts to stop the march of Russian Active Measures.

Russian Active Measures to sway the U.S. election, by design, sought to obscure attribution through denial and deception.

Whether a physical incursion or a digital revolution, the Kremlin confuses reality to push their preferred perception of strength and widespread support.

Here at The Daily Beast last summer, Andrew Weisburd and I showed how Russia created fake news of a terrorist attack at the U.S. airbase in Incirlik, Turkey to influence U.S. audiences.

The Kremlin created the equivalent of “little cyber green men” creating accounts that look like grassroots Americans and amplifying messages through automated bots designed to create the impression of larger discussions.

Russia pairs these covert bots and personas with real people and media outlets, physically placed outside of Russia, that spew and promote Russian propaganda.

Deeper examination of these rabble rousers and their outlets yields a familiar pattern—Russian emigrants, educated by the Kremlin, who want to reside abroad but preach for Putin.

After all, if they’re so motivated by Russian nationalism, why live abroad?

Critical in the creation of cyber dramaturgia and for the Kremlin to maintain plausible deniability are physical actors doing Russia’s preferred bidding.

As I noted during my recent testimony to the Senate Armed Services subcommittee on cybersecurity, the Kremlin cultivates “Useful Idiots” who unwittingly promote Russian positions, and recruits “Fellow Travelers,” like-minded and witting supporters of Putin, amongst foreign populations to further Russian aims and solidify their legitimacy.

These real-world actors become propaganda tools that Russia’s cyber propagandists promote leading to the growth of supportive communities amongst U.S. populations—notably the alt-right—who join in promotion and potentially hacking unwittingly at the behest of Russia.

Putin’s backhanded confession resembled the traditional Russian playbook and mirrors claims in the Christopher Steele dossier on page eight, where a source reported the intelligence effort against the Clinton campaign used “Russian émigré and associated offensive cyber operators based in the US; and… state sponsored cyber operatives working in Russia.”

From the start, the Kremlin prepared to be caught in the act and prepared their response.

Whereas the NSA’s cyberoffensive capability must be developed endogenously by identifying, training, and retaining top cybertalent wearing the American credentials, Russia’s military intelligence arm, the GRU, builds their hacker cadres from Russian cybersecurity companies and the criminal underground.

Rather than drape them in military fatigues, the Kremlin keeps these hackers and cyberexperts in the civilian world.

Contracting cutouts and criminals keep attribution to the Kremlin a step removed.

Unsurprisingly, the Obama administration on Dec. 29 of last year sanctioned a Russian company, Zor Security known for offensive security research, alongside the GRU.

President Trump appears to be the only one who is not convinced Russians, either officially or unofficially, hacked and influenced the U.S. election.

Seventeen intelligence agencies and the Kremlin agree that Russia, not China or someone in a basement, broke into the DNC and many other Americans private databases and email servers.

"Putin’s timing also seems strange, coming the day after revelations that President Trump is negotiating the return of Russian compounds in the U.S.—the same ones that were taken by the Obama administration in response to Kremlin election meddling.”

Is Putin trying to help Trump move past the controversy, or is he taking credit for swaying American minds?

The Russian meddling investigations, numbering three, will only ramp up in the coming months and Putin appears to play from the outside.

Will his comments seek to ease tensions or further promote Active Measures to foment conflict in U.S. politics?

We don’t know which one it will be, but we can be sure he has a plan.

Unlike America, the Kremlin always does.