Poll: 48% Of Ukrainians Communicate In Russian

June 19, 2017
KIEV, Ukraine -- 50.5% of the Ukrainian population use the Ukrainian language as the main language of everyday communication, according to a large poll conducted by the leading sociological centers of the country, KIIS, Rating, SOTSIS, and the Razumkov Center. 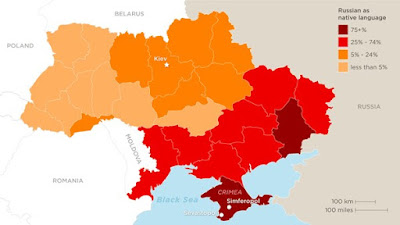 The results of the poll are explained in an article for DT.UA by People's Deputy, Ihor Hryniv, and Polish politician, Miroslav Cech.

According to the study results, the majority of Ukrainians speaking mainly in Ukrainian live in the west (97.2%) and in the south-west (91.6%) of the country.

Moreover, the use of the Russian language as the main language of everyday communication is used by 24% of the respondents.

The same number of respondents (24%) answered that they speak both Ukrainian and Russian languages.

At the same time, the number of citizens of Ukraine, who consider themselves Ukrainians by nationality today is 90.6% of the population.

According to the survey, only 6.3% consider themselves Russians by nationality, with 2.7% indicating nationalities other than Ukrainian or Russian.

It was found that young people aged 18-24 commonly claimed a Ukrainian national identity.

“The survey results show that although there has been a significant increase in declarations of Ukrainian national identity, there has not been a similar change in the language practice. People with this point of view are conservative and not readily open to change generally accepted practices. This was not the situation in Kiev, where for the first time people who at home speak only in Ukrainian outnumber those who speak exclusively in Russian,” the article stated.

The poll was carried out by four major sociological centers in Ukraine in March of this year.