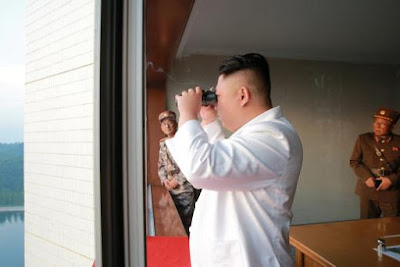 The North successfully test-fired the Hwasong 12 missile on May 14, demonstrating a big stride in its pursuit of an intercontinental ballistic missile capable of reaching the continental U.S.

On that day experts predicted that by 2030 North Korea may have the capabilities to strike a U.S. city directly.

A new article from Yonhap News quotes a much earlier date.

Yonhap News reports that the North said that it fired the missile at the highest angle and the missile reached the maximum altitude of more than 2,111.5 kilometers (1,312 miles) before landing in the East Sea 787 km (489 mi) away.

Michael Elleman, senior fellow for missile defense at the International Institute for Strategic Studies (IISS), said that the missile's engine is very much different from that of the Musudan intermediate-range ballistic missile that the North was believed to be working on as a step toward ICBM development.

"This, to me, is a big deal," Elleman said during a briefing organized by 38 North.

"It's highly unlikely that it was indigenously designed, developed and produced. My working hypothesis at this point, given the performance of the engine, its appearance, it likely is derived from an old Russian engine called the RD-250."

The expert also said that the North could have sourced it from Ukraine.

"What is important here is it comes from a different manufacturer than all the other engines that we've seen, and missiles we've seen, used in North Korea," he said.

"We could be in for surprises in the future. It's very difficult to bound their capabilities and what might occur in the future, because we don't know if they have access to new and improved engines."

Elleman said that the Hwasong 12 is the "first step" towards developing an ICBM capable of striking the U.S.

Asked how close the North is to developing such an ICBM, the expert said that the North would need at least three years to conduct enough tests if they want to have 75 percent confidence in an ICBM.

"For emergency use, they could shorten that timeframe, but at the risk that one or a large fraction of their missile force would fail."