Mr. Poroshenko Goes To Washington: What To Expect From The Ukrainian Leader's First Meeting With Trump

June 20, 2017
KIEV, Ukraine -- Ukrainian President Petro Poroshenko may have pulled off a small coup in winning an audience with U.S. President Donald Trump before Russian leader Vladimir Putin could. 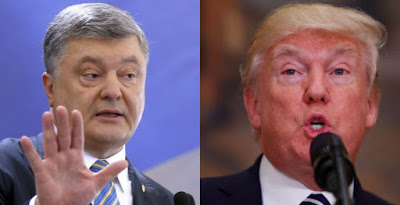 Ukrainian President Petro Poroshenko (L) is due to meet U.S. President Donald Trump at the White House on June 20.

Judging from the deafening silence coming from the White House, however, it’s a small coup that the U.S. administration doesn’t seem interested in publicizing.

When Poroshenko meets Trump for the first time, scheduled for June 20, he could have some explaining to do, and even perhaps some groveling.

Members of Poroshenko’s administration, including his ambassador to Washington and Ukrainian lawmakers, were openly critical of Trump and supportive of his Democratic opponent, Hillary Clinton, during the 2016 election.

Many ended up deleting critical remarks about Trump they had published on their social-media accounts after his election victory.

The American president has shown a penchant for flattery, and according to Vladimir Fesenko, the well-connected director at Kiev’s Penta Center for Political Studies, that isn't something lost on Poroshenko.

The Ukrainian leader will present Trump with a belated birthday gift to kick off their meeting, Fesenko said, citing his own sources.

Poroshenko’s communications team has described previous phone calls between the Ukrainian president and Trump as cordial and positive.

Behind closed doors, however, some Ukrainian officials have told RFE/RL that the tone of those calls was serious, and one expressed “serious” concern about Trump’s commitment to Ukraine.

“We have no idea if [Trump] will keep his promises, because he can often change his mind overnight,” one Ukrainian official with knowledge of the phone calls said recently, speaking anonymously because he wasn’t authorized to speak to the media.

In fact, the Trump administration has said little about the meeting.

Neither the White House nor the State Department had made statements about the upcoming meeting or had put it on their agendas by the time this story was published.

The Poroshenko trip is being described as a working visit by Ukrainian officials, not a full-blown state visit, which would involve great pageantry and symbolism.

According to a Ukrainian administration official, meetings are also scheduled with Vice President Mike Pence, defense officials, military leaders, the secretaries of trade and energy, and heads of both chambers of Congress.

That schedule has not been made public, either.

Ukrainian Foreign Minister Pavlo Klimkin, who met both Trump and Pence during a trip to Washington last month and on the same day as his Russian counterpart, Sergei Lavrov, will be by Poroshenko’s side.

Poroshenko’s press secretary, Svyatoslav Tseholko, did not respond to requests for further details about the trip.

On June 19, he confirmed in a post to Twitter that the president was en route to Washington on a “working visit.”

The trip comes ahead of Trump's first scheduled meeting with Putin, at the G20 summit in Hamburg, Germany, on July 7-8.

That meeting will be closely watched for clues about the White House's thinking about Russian ties.

The Poroshenko trip also follows reports that the conflict between Ukrainian armed forces and Russia-backed separatists in eastern Ukraine has intensified yet again, despite the peace deal known as the Minsk accords.

At least 10,090 people, including 2,777 civilians, have been killed in the conflict since it began in April 2014, according to the United Nations.

Asked whether Trump would in fact meet Poroshenko, White House spokesman Sean Spicer could only confirm the meeting with Pence, a comment that left unanswered the bigger question of a sitdown between the two presidents.

"And then if we have any updates on the President’s schedule, I'll let you know later today as far as what his schedule looks like for tomorrow."

Defense officials have also complained about the poor quality of equipment previously provided: old Humvees that frequently break down, drones that are missing cameras or are easily jammed by Russian equipment.

But the refusal to send more advanced arms was criticized by many Ukrainian soldiers, who were pummeled by Russia-supplied heavy artillery at the peak of the conflict in summer 2014 and winter 2015.

It was also criticized by many lawmakers and policymakers in Washington, Republicans and Democrats alike.

While there is bipartisan support in Congress for supplying new weaponry, Trump has not signaled whether he would consider doing so.

Poroshenko may try to get a direct answer on that.

“Poroshenko’s message will be that it is not possible to move on any political solutions [to end the conflict] if there is no security on the ground,” said Olexiy Haran, a professor of comparative politics at the Kiev-Mohyla Academy and academic director of Democratic Initiatives Foundation, a think tank.

Even if Trump were to agree to support Ukraine with arms, the move would unlikely change anything on the battlefield, merely giving Poroshenko good publicity at home, Mark Galeotti, a senior researcher at the Institute of International Relations in Prague, told RFE/RL.

“American military assistance is symbolic but not likely to make a difference on the line of contact,” he said, referring to the front line.

Poroshenko will also be looking to get a firm commitment from Trump that he won’t roll back the U.S. sanctions imposed on Russia over its annexation of Crimea and military support for separatists, Haran told RFE/RL.

But some officials in Kiev were concerned by Secretary of State Rex Tillerson’s comments to lawmakers, asking them not to restrict the White House’s ability to negotiate with Russia.

The Senate legislation must still be taken up by the House of Representatives, and the White House reportedly plans to push Republican members for a friendlier sanctions deal.

One of Ukraine’s great fears is that Trump’s administration may cut a deal to end the conflict with Putin at Ukraine’s expense.

That’s a fear fueled by Trump’s repeated calls for a more conciliatory policy toward Moscow.

Poroshenko will use this opportunity to clearly explain to Trump the Ukrainian position on Crimea and eastern Ukraine, “so that he could use this information in subsequent negotiations with Putin,” Fesenko said.

Washington is Kiev’s biggest financial backer, providing around $4 billion in direct aid and loan guarantees since the conflict with Russia erupted in 2014 through 2016.

If Poroshenko wants to keep it that way, he will have to prove to Trump that U.S. support for Ukraine is a worthy investment, Haran said.

“It is important for Trump to have visible results,” Haran said.

For that, Poroshenko will be able to boast of the many reforms carried out that earned Ukrainians visa-free travel to most European Union countries.

Poroshenko, himself a businessman, will likely try to appeal to Trump’s love for great business deals, Haran said.

But Poroshenko could do all of those things and still come up short if he can’t do one very important thing, Galeotti said.

The Ukrainian president must provide Trump with an answer to a question posed recently by Tillerson to European diplomats in April: Why should U.S. taxpayers care about Ukraine?

“The most important thing Poroshenko can do is convince Trump that Ukraine matters,” Galeotti said.