June 08, 2017
KIEV, Ukraine -- With the encouragement of the Moscow media, many in Russia and the West assume that Russian Cossacks are entirely behind Vladimir Putin’s war in Ukraine, that they are the group the Kremlin can count on as its janissaries against any opponent, and that there is no possibility that Cossacks could ever line up with Ukraine against Russia. 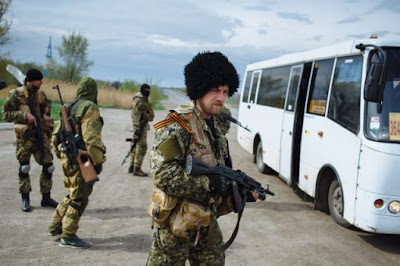 But such assumptions are entirely wrong: Putin’s Ukraine adventure has split Russia’s Cossacks perhaps more deeply than any other indigenous people in Russia.

From the very beginning of Putin’s efforts, Moscow sought to involve the Cossacks in its seizure and annexation of Crimea and in its fighting in Donbass.

Russia has given prominent media coverage to Cossacks who, in fact, took part in those campaigns and who have declared that they are quite prepared to carry the fight to Kiev and beyond.

Moreover, the Russian media has expanded its coverage of this issue following statements by some Ukrainian government officials that the Kuban and Terek regions—traditional Cossack lands—should belong to Ukraine.

What the Russian media and the Western media—which has largely followed the former’s lead—have not covered is the other side of the story: Many Cossacks rejected Moscow’s call to take part in its operations from the beginning and continue to do so to this day.

Indeed, a growing number of Cossacks have fled Russia to Ukraine in order to take part in Ukraine’s fight against Russian imperialism.

The exact numbers of Cossacks on each side remain a matter of dispute, with each group claiming hundreds are involved.

And it is likely that those backing Moscow outnumber those supporting Kiev, given where most Cossacks live and the administrative resources available to Russian officials.

But the predominance of the Russian side almost certainly is far smaller than Moscow media have suggested.

That some Cossacks are fighting for Ukraine against Moscow should not have surprised anyone familiar with the history of the Cossack nation.

On the one hand, Ukraine is the original homeland of many Cossacks, who typically spoke Ukrainian rather than Russian and who often identified with Ukrainians more than with Russians.

And on the other, the Cossacks are an extremely diverse group.

Not only have 13 different Cossack “hosts” historically existed in tsarist times, but some of them were anything but the foot-soldiers of the Russian empire that many assume.

Indeed, one host was Buryat and Buddhist, for example.

Moreover, the neo-Cossack movement over the last generation has attracted not only those who see themselves as defenders of the Russian state and empire but many others who are drawn to the freedom-loving traditions that many Cossack hosts and individual stanitsas (villages inside Cossack hosts) have long represented.

The fact that Cossacks are now to be found on both sides of the battle lines in Ukraine has deepened this division as well as led some in Moscow to reconsider just how much they may be able to count on the Cossacks to defend the Russian state against all enemies foreign and domestic.

It is one thing to give Cossacks weapons to guard things the Russian state wants guarded; it is quite another to give weapons to those who might eventually turn on the state itself.

Indeed, according to Aleksandr Dzikovitsky, a leading émigré commentator on Cossack affairs, some in the Russian capital have updated the infamous slogan of late imperial times—“Beat the Jews and Save Russia”—to now read “Beat the Cossacks and Save Russia”.

Such Muscovite attitudes will do nothing to win Cossacks to Russia’s side: rather, they are likely to have exactly the opposite effect.

And that has some potentially serious consequences not only for the war in Ukraine, to which more Cossacks may go to help the Ukrainian side, but also for the future of the Russian Federation.

The reason for what may seem to some a hyperbolic conclusion is this: The Cossack communities in many parts of Russia are located in and intermixed with Ukrainian areas, places Ukrainians traditionally refer to as “klins” or “wedges.”

The most famous of these is in the Russian Far East, where people with ethnic-Ukrainian and Cossack roots form nearly half of the population, but there are others spread across the country as well.

Consequently, and seemingly unexpectedly, Putin’s war in Ukraine may come home to haunt him and his regime via the Cossacks, a group the Kremlin leader does not acknowledge as a nation and assumes will be invariably loyal to him.