June 26, 2017
LVIV, Ukraine -- Lviv is in the same league as "must-visit" cities Prague and Krakow, though it remains a little-known secret, writes Shaughnessy Dow. 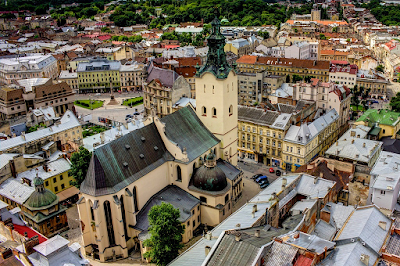 The mashrootka veered around a curve, narrowly missing an abyss of a pothole and a gaggle of free-roaming geese.

We clung to our benches for dear life as the brightly coloured minibus, the cheap and usual transport of most rural people in Ukraine, threatened to fall apart.

The driver, onto his second pack of cigarettes of the journey, let out a jovial, bellowing laugh in reference to the state of the local roads.

Such is life in Ukraine, where the locals find as much to be happy about as there are potholes in the roads.

In the 1980s, Air Canada flew no farther into Europe than Vienna.

East and West Berlin were divided by a wall and communist states were viewed with the same suspicion they viewed the western world.

Even the gauge of trains could not be agreed upon.

Fast-forward to the present day, where, in a world rife with globalization — and some may say sterilization of European cities — authentic experiences must be sought out with rigour.

The frontier of travel, where countries can be seen in their true state, unblemished by hordes of tourists, continues to push eastwards.

In the folkloric west of Ukraine, life moves in a disarmingly unhurried way.

Here, the conflict in the far east of Ukraine feels thousands of kilometres away — because it is.

This is a place to experience wooden churches frequented by Ukrainians wearing vyshyvanka, colourful embroidered shirts, merry men inviting you to try the delicious salo, cured pig fat (and a source of family pride) or the dangerous samohon, local moonshine vodka.

In rural areas, vernacular architecture abounds, likely equal parts due to tradition and a financial inability to modernize.

In the largest western city and UNESCO World Heritage Site Lviv, a distinct Austro-Hungarian air lingers, not just with the disarmingly beautiful mix of Gothic, Renaissance, baroque and classical styles, but also a distinguished coffee culture and arts scene.

The city is reachable on flights from several European airports, as well by train from Kiev and Poland.

After a long day of exhausting travel to get to Lviv, and a somewhat frightening taxi ride in from the airport (our driver made blind passes around corners and overtook entire streetcars), the enchanted old-world charm of its cobblestone streets and the illuminated Dormition Church reinvigorated us: we were surrounded in beauty.

And we had it all to ourselves.

The centre of town is the beautiful Rynok Square, the impressive medieval heart of the city and cultural hub of town where you can drink a craft beer at the hip Pravda Beer Theatre, looking out onto the town hall or one of four ornate 18th-century fountains.

Next door, Svit Kavy does legendary cappuccino and cakes in its always-packed but tiny location.

Nearby museums include the palace of Polish King Jan III Sobieski, Korniakt Palace, the Pharmacy Museum with its hidden alchemist’s lair and the Museum-Arsenal showcasing the military history of the town.

The Chapel of the Boim family, is a masterpiece of renaissance religious architecture.

For those with an interest in Jewish heritage, the destroyed Golden Rose Synagogue offers a chilling reminder of the impact of the Nazis on the city’s population.

Once amounting to one-third of the population, the present Jewish population of Lviv now comprises just a handful of older people.

Yet Jewish heritage abounds in the city, with faded Hebrew letters on former shop fronts quietly reminding the city and its guests of its former Semitic inhabitants.

Moving out of the city, we caught a train to Kolomyia, the centre of Hutsul culture, the mountain dwelling ethnic minority of Ukrainian Carpathians.

Though dusty and faded, some of the Austro-Hungarian charm of Lviv can still be found here.

We gazed in stupefaction at the sublime ridiculousness of Pysanka, an Easter-egg museum shaped like — what else? — a giant Easter egg.

Inside were fabulously decorated pysanky, Ukrainian Easter eggs, long a symbol of Ukrainian religious celebration, denoting the springtime renewal of life as much as Christ's resurrection.

Nearby, the Museum of Hutsul and Pokuttya Folk Art displays wealth of artistic tradition in the area, with carved, painted and adorned everyday items from ladles to wagons to recreations of entire houses.

The town is also well located for venturing off into the Carpathian Mountains, with both train and maschrootka (minibus) options.

In order to really experience the local culture, we took the venerable maschrootka, which rewarded us with a bumpy, disorienting ride — but also an opportunity to observe how people use their ingenuity to circumvent the lack of infrastructure: the drivers run delivery services for people at stops, produce is bought and sold, and small talk exchanged.

The Ukrainian side of the Carpathian Mountains imparts a sense of mystery on visitors, along with fresh air, clear rivers and abundant wooden houses, with folk traditions at every turn.

It was in this area that the tales of Dovbush, the Ukrainian Robin Hood, began to be told.

The smell of wood-burning fire fills the air, and locals cross themselves each and every time they pass a church.

Co-existing with folk traditions are the smart ski and hiking resorts of Yaremche and Bukovel, once popular holiday locations in the Soviet days.

We enjoyed a fine day of hiking in and around Yaremche, before returning to Kolomyya to see its craft markets.

The next day, we woke up bleary-eyed at 5 a.m. in order to attend the local embroidery and craft market, wildly popular as Easter was just around the corner.

Here, babushkas (grandmothers), their heads covered in scarves, come from all over the countryside in the hope of selling an embroidered shirt or tablecloth that required hours of hard work and skill to craft.

Returning to Lviv, we dined at the opulent Baczewski Restaurant, a luxurious affair characterized by vested waiters, silk tablecloths and the tasteful accompaniment of quiet jazz music.

Three courses, wine, aperitifs, digestifs and coffee came to around CAD$25 (US$19), a bargain for the most expensive restaurant in town.

A visit to the airy and lavish Lychakiv cemetery leaves visitors equal parts creeped out and impressed.

A walk through its massive Ukrainian, Polish and Austrian tombs is something like a walk through the history of the city itself, not unlike a certain famous cemetery in Paris in feel.

Nearby, the open-air Museum of Folk Architecture and Rural Life offers visitors a walk through rural history, comprising different zones based upon different regional groupings.

Often old, threatened buildings have been relocated here to be saved.

The incredibly enthusiastic guides here filled us in on everything from oil extraction to traditional garlic braiding to house painting.

A day more artistic and contemporary in feel followed, with visits to Dzyga, an art gallery, bar and coffee spot with plenty of seating and a bohemian feel, just a stone’s throw from the impressive Dominican cathedral.

Just down the postcard-worthy Vremenska Street, a true highlight is the ICONART Gallery, a fascinating space where religious art is reimagined in contemporary cultural context, to a very thought provoking end.

Here, the kindly proprietor and her friends offered us shots of cognac and liberal hunks of Easter cake, and wound up bringing us to their home for Easter dinner and to paint us.

Lviv also offers a dizzying array of new experiences, including the possibility of sampling the cuisine of former Soviet republics not often represented in Canada: the dangerously delicious Uzbek cuisine at Chaikhana Samarkand or the delicious Georgian dumplings and pies of Bagrationi, to Armenian cuisine and beyond.

A trip to Ukraine takes careful planning, however, the reward greatly outweighs any of these additional efforts.

Ukrainians’ legendary hospitality certainly rivals that of the Fijians.

Here is a place where being a tourist renders you an object of fascination and respect rather than the feeling of being a sort of pariah in oversaturated places such as Paris.

Though airfares can be expensive, staying in Ukraine represents a phenomenal deal.

A two-bedroom apartment on Lviv’s main square that we rented for two weeks cost just over CAD$200 (US$151).

Getting around is simple: the city boasts Uber and taxis are around every corner.

But the best way to explore this leafy hidden gem is simply by walking.

The lack of tourism means interesting areas are common and yours to discover.

The locals simply do not expect to see tourists, and being a pickpocket here would likely be a fruitless job.

People are helpful and proud of their city — and willing to help you discover it.

Interest in eastern Europe has continued to increase since the end of communism, while the advent of mass tourism, has elevated certain gilded and gifted cities such as Prague and Krakow to “must-visit” locations because of their unique and ancient character.

Lviv is certainly in their league, though it remains a little-known secret.

It is a little further east, a little tougher to reach — and a much more authentic experience.

It is perhaps one of the last Old World European destinations that can be seen in its original splendour.

Visit while you can.