June 06, 2017
WASHINGTON, DC -- How does it happen that a child growing up in eastern Galicia among Ukrainians, Poles, Moldovans, Germans, Austrians, Jews, Roma, and Armenians dodges Nazi death squads and the Red Army, learns first-hand what it means to be a “displaced person” in occupied Austria, emigrates to the United States, completes university and seminary studies before being ordained a priest, writes a pioneering doctoral dissertation on ecumenism, joins a monastic order, is clandestinely ordained a bishop, has his episcopal ordination recognized by St. John Paul II, is created a cardinal by the same Pope - and at an age when many men begin to contemplate retirement, returns to his newly self-liberated homeland for the first time in a half-century and over the next two decades becomes the most widely respected and deeply beloved figure in the country? 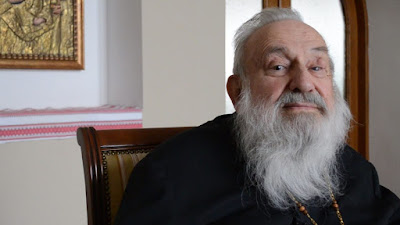 To comprehend the extraordinary life of Cardinal Lubomyr Husar, who died on May 31 at age 84, is to trace the arc of the slow-motion martyrdom of the Ukrainian Greek Catholic Church in the mid 20th century and its resurrection in the 21st.

As the Catholic Church in Poland was the safe deposit box of national memory and identity during the 123 years when “Poland” disappeared from the map of Europe (having been vivisected by Russia, Austria, and Prussia in the Third Polish Partition of 1795), so the Ukrainian Greek Catholic Church (UGCC) was one of the principal repositories of Ukrainian national identity and aspiration in the hard decades when Stalin first tried to starve Ukraine into submission and later used every tool at the disposal of a totalitarian state to destroy Ukraine’s language, culture, and self-awareness — a project continued for more than four decades by Stalin’s successors.

But an argument can be made that the achievement of the UGCC in Ukraine was even more remarkable than that of the Latin-rite Catholic Church in Poland.

For Polish Catholicism was very much a visible presence in Poland’s national life, both during the partitions that eradicated the country and, later, under both Nazi and Communist tyranny.

The UGCC, however, did its most impressive work of preserving and developing national identity, culture, and morale during the four and a half decades when it was the world’s largest underground religious body — a Church with no public presence whatsoever, thanks to a canonically illegal and coerced “reunion” with Russian Orthodoxy engineered in 1946 by the Soviet secret police and the leadership of the Russian Orthodox Church.

And while the UGCC hung on by its collective fingernails between 1946 and 1991, conducting clandestine worship and education in the Ukrainian forests, Ukrainian Greek Catholic leaders like Lubomyr Husar, living in the West — in Husar’s case, in New York, Washington, and other American locales, before redeploying to Rome — laid the foundations for a revival of Greek Catholic life at a time that, for most of Husar’s adult life, seemed unimaginable: the time of a free Ukraine unshackled from the Soviet Union and freed to create its own destiny.

That hoped-for miracle of liberation took place in 1991, when the Soviet Union dissolved, and since then, Greek Catholic life in Ukraine has flourished.

Lubomyr Husar, a man of deep faith, would be the first to insist that that miraculous resurrection was a work of divine providence and grace.

But as Cardinal Husar is laid to rest today in St. George’s Cathedral in L’viv, hundreds of thousands of his countrymen having paid him their last respects in the days since his death, credit should be given to this visionary man of wisdom who bridged numerous worlds — Byzantine and Latin, Catholic and Orthodox, religious and secular, pre-modern and post-modern — in a unique way.

It was Husar who staunchly supported the development of the Ukrainian Catholic University, the only Catholic institution of higher learning in the former Soviet space, which has become one of the premier universities in Ukraine in a mere two decades and a model for higher education unburdened by the intellectual corruptions of Homo Sovieticus.

It was Husar who oversaw, as major-archbishop of Kiev-Halych and head of the UGCC, an extraordinary expansion of the Greek Catholic priesthood, and saw to the reform of seminaries so that the clergy of an independent Ukraine would be better equipped to minister in a post-underground religious environment.

It was Husar who welcomed John Paul II to Ukraine in 2001 in what was the first papal visit to a former Soviet “republic” — a week-long pilgrimage that, against all odds and expectations, became a moment of ecumenical encounter between Greek Catholics and Ukrainian Orthodox.

And it was Husar who, in retirement, became a moral reference point for a society still deeply wounded by its Soviet past.

In a country struggling to shed the bad habits of duplicity engrained during its Communist period, and in a political community whose debates are often more characterized by heat than by light, Lubomyr Husar became a kind of national patriarch: the voice of reason, moderation, and wise counsel amidst the cacophony of post-Communist politics.

And during the Maidan revolution of dignity in 2013–14, a now-blind Cardinal Husar could be found on Kiev’s Independence Square, in solidarity with his people’s hopes for a future beyond corruption, a future in which Ukraine would take its rightful place as an integral part of the West, bringing with it the riches of Byzantine spirituality and culture.

The UGCC is now led by Husar’s dynamic young successor, Major-Archbishop Sviatoslav Shevchuk — which is another testimony to Husar’s leadership, for he raised up a generation of polyglot, intellectually well-prepared, and politically shrewd leaders such as Shevchuk and the president of the Ukrainian Catholic University, Bishop Borys Hudziak.

Like Cardinal Husar, whom they revered, Shevchuk and Hudziak are men of God who are also playing an indispensable public role, now in a 21st-century Ukraine struggling to realize the bright promise of the Maidan Revolution while suffering under a Russian invasion that has cost over 10,000 lives and created more than a million and a half internally displaced persons.

It was likely a sadness to Husar that the Vatican has never brought itself to use the words “invasion” and “illegal annexation” to describe the Russian occupation of Crimea, or the word “war” to describe what Russia is doing in eastern Ukraine.

And it remains incomprehensible to many why Major-Archbishop Shevchuk, the leader of the largest of the Eastern Catholic Churches, has not received the cardinal’s red hat to which Lumomyr Husar brought such distinction.

Perhaps the great cardinal’s death will cause some rethinking in Rome of its latest Ostpolitik; that would be a fitting tribute to Cardinal Husar.

But whatever happens along the Tiber, the remarkable life of Lubomyr Husar helped make it possible for the Ukrainian Greek Catholic Church to thrive in an independent Ukraine.

“Freedom,” Husar insisted, “is the opportunity to do good.”

May his memory be eternal.