June 25, 2017
MENA, Ukraine -- The newspaper in this northeastern Ukrainian city, about 35 miles from the Russian border, is named Nashe Slovo, which means “Our Word” in Ukrainian. 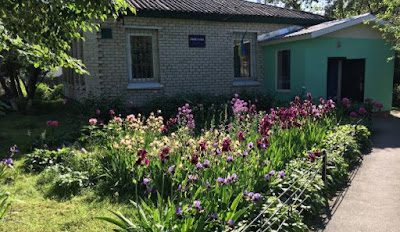 The office of Nashe Slovo, the dominant source of news and information, with a circulation of 7,470, reaching about half the households in Lena, Ukraine.

We journalists naturally focus on the “word” part of that, but in Mena, now, the issue is the definition of “our.”

Who really owns or controls the words?

Does that plural possessive refer to the people of Mena, or the staff of the newspaper, or the official owners, or elected officials?

The answer makes you think about why you trust your own Florida Times-Union and understand why two of us came to Ukraine as volunteers to help the newspaper as it earns its independence and, hopefully, survival.

When Nashe Slovo was founded in 1931 during the Soviet era, nashe meant the local commissars or bureaucrats who controlled every word and naturally used it for propaganda — Pravda on the local level.

When Ukraine declared its independence from the crumbling Soviet Union in 1991, the new constitution provided that such newspapers would be owned by three “co-founders:” the district administrator (delegated from the president of Ukraine), the elected district council (like a county commission) and the staff of the newspaper.

You can imagine how well that worked.

Oleksandr Nazarenko, chief editor of Nashe Slovo, acknowledged, through a translator, that newspapers tended to be “propaganda instruments of the government or the state.”

As democracy took root and evolved in Ukraine and the 2014 Revolution of Dignity rejected Russian ties in favor of a closer relationship with the European Union, the National Union of Journalists persuaded the Ukrainian Parliament to enact a three-year process for privatizing — liberating — the government-controlled press.

Oligarchs have bought control of much of the national media, causing new credibility problems, and at the district level, council members are dragging their feet as much and for as long as they can, still wielding a degree of control that politicians value.

“They represent political parties,” Nazarenko said, “and they would like to keep, as long as possible, the printed media as an instrument of power, to help them during the next election.”

But some local newspapers like Nashe Slovo are pushing ahead, trying to figure out their future on their own, without reliance on free rent and government subsidies, which can be up to 80 percent of revenue.

As an early statement of independence, Nazarenko has refused the subsidy for the past 10 years but says the paper still is “a little” profitable.

Mena, a city of 12,000 people in an agricultural region of about 36,000, is notable for two things: historically, as the site of Nazi murders of many of its Jews and, now, as the improbable site for a popular zoo.

Nashe Slovo is the dominant source of news and information, with circulation of 7,470, reaching about half the households in the city.

Its staff of 11 works in a small, 80-year-old building that, for now, continues to be rent-free.

The expansive and ­gloriously blooming flower garden out front could be — hopefully is — a metaphor for the newspaper.

IREX, an international nonprofit that works on democratic development around the world, invited Marc Jenkins, digital media sales director for T-U Media, and me to come here and work with the staff for three days.

In August, some of them will visit and observe the T-U.

Nashe Slovo was named the best local newspaper in Ukraine in 2012, but IREX said its problems include the loss of subscribers and advertisers in a worsening economy as Ukraine remains on war footing against the Russian incursion in the east.

An estimated 10,000 Ukrainians have been killed there so far.

As it faces the free market, Nashe Slovo wants to improve its local reporting, ad sales, website and management practices.

While Marc worked in one room with the advertising and business-side staff, I met with Nazarenko and the reporters on a porch.

As we huddled around a laptop, I presented my definitions of local news and advice on writing styles, reader orientation and creativity.

They were eager to hear, as there is very little journalism education or training available in Ukraine.

I offered the T-U’s concept of being sure to include positive news alongside the negative.

I was humbled at Nashe Slovo’s heart-wrenching example: the “resettlers,” or refugees, from the war zone who came to Mena with few possessions and “started everything from scratch.”

And when I reminded the Ukrainians of journalism’s primal goal of the pursuit of truth, I admit I was moved when they applauded.

I asked if they feel freer to seek the truth since the 2014 revolution, and Nazarenko answered “Tak.” Yes. “Of course.”

The Committee to Protect Journalists says that 19 journalists have died violently in Ukraine since independence, nine of them in the last three years, including a prominent TV and online writer who was blown up in Kiev last summer.

“Things are changing,” said Ivan Petrykey, 32, who trained as a lawyer before he became a Nashe Slovo reporter.

“Journalists are getting more protection. But in Ukraine, it’s still risky to be a journalist.”

Nazarenko acknowledged that it took “some strong will, courage” to plunge into privatization.

While Ukrainians have a strong work ethic, he said, the Soviet oppression crushed many people’s initiative and entrepreneurism.

Are you confident you can compete and survive in a free market? “Tak.”

One of the great reasons I travel is because it always makes me more appreciative of what we have: in this case, the First Amendment, a society that protects democratic functions like journalism and strong private ownership that respects our role and demands our responsibility.

The Ukrainians are coming to appreciate journalism in their own way.

Marc and I were guests at a national Journalist’s Day celebration in Chernihiv, where the governor and mayor spoke in honor of journalists.

Knowing that at home President Donald Trump is calling people like me “enemies of the people,” I especially appreciated the statement of Andrii Parubii, speaker of the Parliament:

“Journalism is one of most vital feeding roots for any democratic nation. Not only spreading the word newsmen are committed to, they above all are bearers for freedom of speech. Without this freedom, without diversity of thoughts, ideas and views, without being eager to pose things fair and balanced, democracy itself would not as such be imaginable.”

Parubii noted that, in the ongoing “Russian aggression,” reporters are working alongside soldiers on the front lines:

“Our journalists have actually become the information field soldiers of noble aim to protect our right to the truth, our sovereignty. They do defend our nation with their greatest weapon — with the word.”